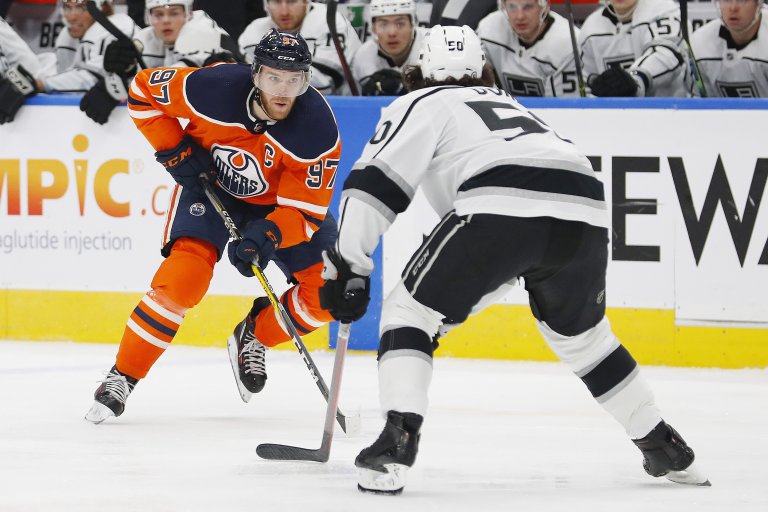 Connor McDavid and Leon Draisaitl are set to begin what they hope will be a lengthy playoff run for the Edmonton Oilers. The Oilers host the Los Angeles Kings in Game 1 of their 2022 NHL Playoff series on Monday, May 2nd (10:00 PM EST).

Edmonton is a heavy home favorite in the Kings vs Oilers Game 1 odds. The total is set at 6.5 for a matchup that features two veteran goaltenders. The game will be broadcast on both CBC and ESPN2.

Let’s take a look at the Game 1 odds for Kings vs Oilers and offer you our NHL best bet.

Odds as of May 1st at Barstool Sportsbook.

The Oilers are listed on the puckline at +132 odds, while the Kings are -159 to keep the game within two goals. Edmonton’s -182 moneyline price gives them 62% implied probability to win.

The Oilers are top-10 favorites in the 2022 Stanley Cup odds, while the Kings have the longest Cup odds of any playoff team at +5000.

Edmonton is favored to beat Los Angeles at home in the Game 1 NHL Playoffs odds. This isn’t surprising considering Edmonton opened as large favorites in the Oilers vs Kings series odds. Oddsmakers project Edmonton has a 70% chance to advance onto Round 2.

The Oilers finished second in the pacific Division with 104 points, which gives them home-ice advantage versus Los Angeles. Edmonton is 14-0-1 in its past 15 home games and appear unstoppable when playing in front of the passionate fans at Rogers Place.

Unlike in some previous years, the Oilers have plenty of momentum entering Game 1 Monday. Not only are the Oilers getting the job done at home, but they also went 11-2-1 overall during the month of April.

The primary reason to consider a Game 1 wager on Edmonton is the dynamic duo of Connor McDavid and Leon Draisaitl. McDavid set a career high with 123 points and is a top-five favorite in the Hart Trophy odds.

McDavid and Draisaitl haven’t won a playoff series in five years, however, which is primarily due to poor defense and goaltending. The good news is netminder Mike Smith has been playing some of his best hockey lately, but the bad news is d-man Darnell Nurse remains injured.

Los Angeles isn’t being much of a chance to compete with the Oilers in their first-round playoff series. The Kings’ +185 series price gives them 35% implied probability to advance onto Round 2. LA finished third in the Pacific Division with 99 points.

The major reason oddsmakers are skeptical on the Kings is an injury to the team’s best defenseman. Drew Doughty underwent wrist surgery last month and will be out until next season. Los Angeles still went a 7-4-1  during the month of April despite Doughty’s absence.

He is expected to make a full recovery for next season. pic.twitter.com/vNtgSZ1fS9

While the Kings don’t have a superstar like McDavid or Draisaitl on their roster, they do have some experienced playoff veterans. Anze Kopitar, Dustin Brown and Jonathan Quick were all members of the LA teams that captured Cups in 2012 and 2014.

While playoff experience is certainly a valuable asset, the Kings haven’t won a postseason series since that Cup win in 2014. Over the past seven years, the Kings have made the playoffs twice, losing in the first round both times.

LA has allowed significantly fewer goals against than Edmonton this season, but they also had Doughty for most of the year. The Kings’ chances of stealing Game 1 rest in the fate of the goalie Quick, who has won five straight games and allowed only eight goals in that span.

Los Angeles shouldn’t be discounted in the Oilers vs Kings series odds, especially if Quick turns back the clock in the crease. But if they steal a game or two, it’s likely going to come on home ice. The Oilers are dominating at Rogers Place and will carry that momentum into Game 1.

These two teams met four times this season, with Edmonton winning three times. McDavid scored in all but one of those games and should make a statement in Game 1 as he tries to avoid another early postseason exit.

Anything can happen during the course of a playoff series, but it’s often smart to bet the home team in Game 1 if they’re carrying momentum from the regular season. Here are some betting trends to note for Game 1 Kings vs Oilers:

Edmonton’s play on home ice makes them the proper side in the Game 1 Kings vs Oilers odds. Look for the Oilers to make a statement Monday as they prove this year’s postseason is going to be different than the last few.