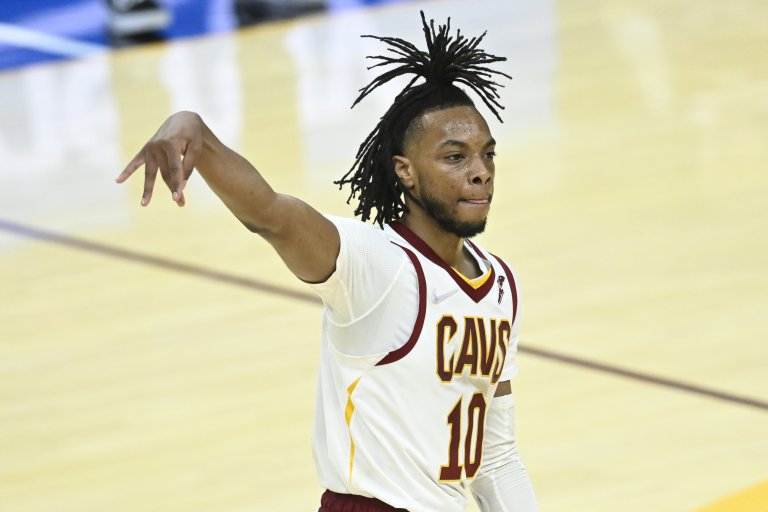 Cleveland is slumping at the worst possible time. A few weeks ago they seemed like a lock to be a top-six seed in the East, but that possibility is looking more and more grim with each passing loss.

The Cavs have lost five of their past six entering play on Saturday (April 2), and currently sit in seventh place 3 games behind the idle Raptors. To make matters worse, Cleveland has been hit hard by injuries and will face the Knicks at MSG without their top-two big men.

Odds as of April 1st at BetMGM.

Despite their depleted roster, the Cavs opened up as 2-point road favorites in a contest that features a total of 214.5. Tip-off is slated for 1pm ET in New York, where the Knicks are just 16-22 this season.

The Cavs are fresh off a 24-point loss in Atlanta on Thursday, which marked their second straight game without prized rookie Evan Mobley. The Rookie of the Year candidate is suffering from a sprained ankle, and will once again be absent on Saturday.

Cleveland’s Evan Mobley will be out the next three games rehabbing his sprained left ankle, Cavs say.

Mobley’s front court partner Jarrett Allen sat out his 12th game with a broken finger, and a timeline for his return is still unclear. Cleveland is 5-7 since Allen suffered the injury, losing to all but one of the teams they’ve faced that’s heading to the postseason.

With their twin towers on the sidelines, the Cavs got 15 points and 13 boards from 7-footer Moses Brown versus the Hawks, but he was just one of two players that shot above 50% from the field. Leading scorer Darius Garland, who’s being tasked with an even heavier offensive load now, managed 18 points on 7-of-21 shooting. The All-Star guard has not fared well against New York this season in the scoring department, averaging only 14.5 points in two outings.

Darius Garland has been Marching to the top of several leaderboards this month. 📈#LetEmKnow | #DGMostImproved pic.twitter.com/X8156SaoCo

Cleveland has been struggling at both ends of the court scoring 107 or fewer points in four of their past five outings, while conceding at least 117 points four times in their last six games.

As far as Saturday goes, it’s a good news bad news situation for the Cavs. The good news is that they’ll face a Knicks team with nothing to play for and who’ll be minus their leading scorer. The bad news is New York has actually been playing pretty well lately.

New York enters play having won four of its last five. Three of those wins came against postseason bound teams in the East, including one over conference leader Miami.

Julius Randle is OUT for tomorrow’s game against the Cavaliers with the quad injury. Knicks say he’s day-to-day. There’s no plan as of today for him to shut it down for the season.

The Knicks will face Cleveland without Julius Randle, who leads the team in points and assists per game, as well as PER. Despite being a team leader, Randle has actually been a disappointment for most of the season and there’s reports that he wants out of the Big Apple.

Julius Randle is reportedly willing to force his way out of New York. 😬 pic.twitter.com/zxFWkaBatC

He’s shooting 41% from the field and 30% from three, which are both well below his career averages. He ranks dead last among qualified shooters in mid-range jump shot percentage, and out of 93 players who have taken more 300 threes, only one shooter has been less efficient. All this after being an All-NBA team member last season.

Doesn’t get talked about enough as one of the best young stars in the league. pic.twitter.com/mXeuKJK9yl

With so many Knicks down look for RJ Barrett to carry the offense. The 21-year-old has produced six 30+ point games over the past two months and is averaging 22 points in two meetings versus the Cavs this season.

Even though Cleveland is 0-2 against New York this season we should expect them to draw plenty of action in the betting department. The Cavs have a lot at stake while New York is now just playing out the stretch.

The Cleveland Cavaliers getting ready for the playoffs: pic.twitter.com/3mYmPUddKI

I’m going in a different direction, however. Cleveland’s offense takes a major dip in efficiency without Mobley and Allen, and a tilt versus the Knicks feels like a prime under candidate. Cleveland and New York rank 20th and 24th respectively in offensive rating, while each is among the bottom-six in the NBA in terms of pace.

The last meeting between the two produced only 188 points and I’m betting this matchup will fall short of the total as well.