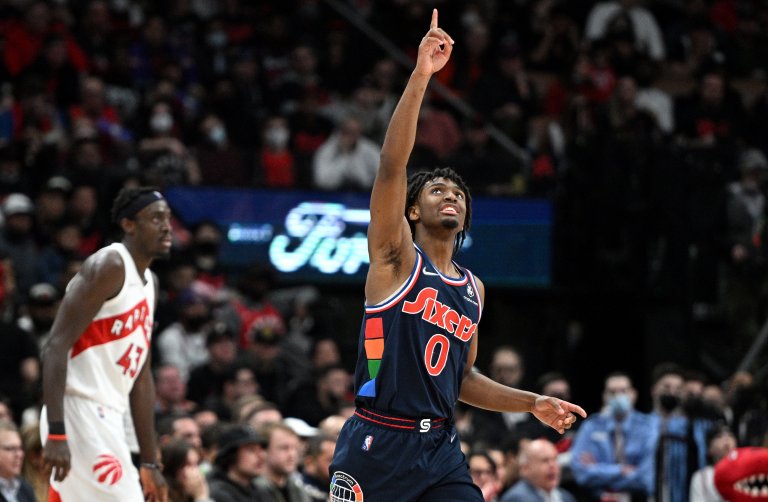 Apr 28, 2022; Toronto, Ontario, CAN; Philadelphia 76ers guard Tyrese Maxey (0) gestures after a scoring play against the Toronto Raptors in the second half during game six of the first round for the 2022 NBA playoffs at Scotiabank Arena. Mandatory Credit: Dan Hamilton-USA TODAY Sports

The Miami Heat, Philadelphia 76ers, Phoenix Suns and Dallas Mavericks are in action on Monday night
Joel Embiid and Kyle Lowry are both ruled out
Read below for the latest NBA player props and best bets

Monday night brings us the series openers between Miami and Philadelphia and Phoenix and Dallas. Following two entertaining Sunday games, expectations are high for these Game 1s. Despite Kyle Lowry’s absence, the Heat are 7.5-point favorites over the Philadelphia 76ers with Joel Embiid ruled out for the first two games with an orbital fracture and concussion.

Dallas is 5.5-point underdogs for their game with the Suns, who welcomed back Devin Booker at the end of the first round. The Mavericks lost all three of their regular season meetings with the Suns, though they all took place before Dallas’ season-altering Kristaps Porzingis trade.

Odds as of May 2 at FanDuel Sportsbook

Despite facing the favorites in NBA Championship odds, Luka Doncic has Monday night’s highest points line at 30.5. The Slovenian returned from a calf issue in the first round to carry Dallas past Utah.

Tyrese Maxey was red-hot to start the first round. He slumped between games three and five, but bounced back in a big way in the Game 6 clincher, dropping 25 points on 16 shots. He matches up with a Heat team who he torched in their last meeting, scoring 28 points on just 15 field goal attempts.

Kyle Lowry’s injury should benefit Maxey. There will be more minutes for Miami’s weaker perimeter defenders, and we’ve seen how the Dallas native will relentlessly attack favorable matchups. Duncan Robinson and Tyler Herro are particularly vulnerable, and we’ve seen Maxey go at both of them in the past.

All eyes are on James Harden, but Maxey’s role in the offense is huge without Joel Embiid. His speed earned the Sixers a lot of easy baskets in Game 6 against the Raptors, and Doc Rivers needs similar from the second-year guard on Monday night.

Maxey averaged almost 19 points per game and shot 48% from three after the All-Star break. That was primarily playing alongside Embiid, and his usage rate will be considerably higher with the MVP candidate sitting out. We like this over even at 22.5.

Ayton Hits Points and Rebounds Over

Deandre Ayton is a proven playoff performer. Just like last postseason, he has stepped up in a big way, delivering for the Suns in Devin Booker’s absence. While Booker has returned, he’s clearly not going to be able to carry the same offensive burden he usually would. Ayton’s role at both ends is crucial, and we will once again see a lot of his two-man game with Chris Paul.

The 29.5 points and rebounds line seems relatively fair for Game 1. Ayton hit the over in three of his six first round games. Yet there’s going to be considerable opportunity for even bigger numbers against a Dallas team which is generally small. Ayton can be a menace on the glass, as was shown by grabbing 30 boards across his two regular season meetings with the Mavs.

The Mavericks were happy to play small against Rudy Gobert, and they will persevere with that approach against Ayton. Offensive rebounds and put backs are a very real factor for Ayton as a result. With Dallas throwing their best defenders at Booker and Paul, there will be lots of chances for Ayton to roll to the basket or pop for his trademark mid-ranger.

Ayton has scored 16 or more points in 11 of his last 13 games. He’s will likely reach the teens in rebounding once again. Take the over here.