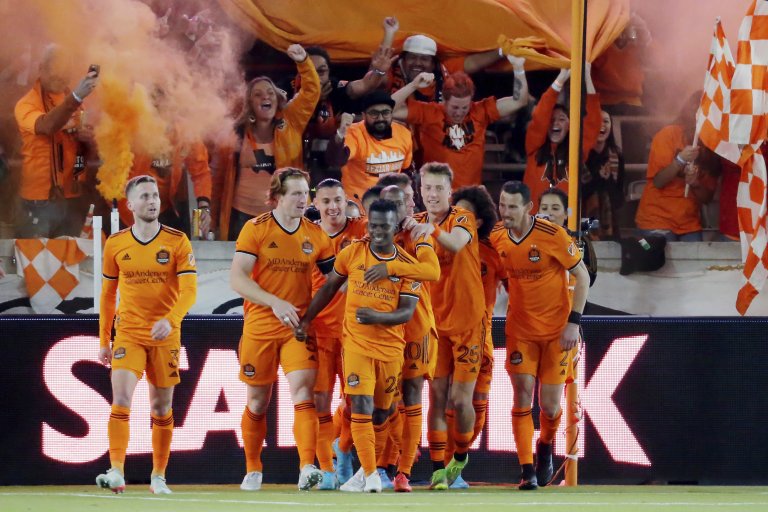 Houston Dynamo forward Carlos Darwin Quintero, center front, is congratulated by teammates after scoring his second goal against the Vancouver Whitecaps, during the second half of an MLS soccer match Saturday, March 12, 2022, in Houston. (AP Photo/Michael Wyke)

The MLS Week 7 schedule kicks off Saturday afternoon with Montreal hosting Vancouver at 3:00 pm EST. Read on for MLS Week 7 odds below, followed by our MLS betting picks.

Check out these Caesars Sportsbook bonuses before betting these MLS odds

NYCFC and Seattle are coming off their CCL Semifinals match on Wednesday, a 1-1 draw, that sees Seattle advancing 4-2 on aggregate. Both are heavy -175 favorites at home in MLS Week 7.

Over/Under bettors have seen a fairly even mix of totals results so far, with Unders being slightly more profitable. There are 12 teams who have more Unders than Overs, six that are an even 3-3, and 10 that have more Overs than Unders.

Montreal is heating up, with seven points in their past three matches, despite all of those coming on the road. In fact, of their six matches, five have been away from home. With seven of their next ten back on their home pitch, they’re in a position to go on a good run.

The ‘Caps are training in Montreal ahead of their first clash against Canadian opponents for a while! 🍁

How long? Find out by joining club reporter Sarita Patel for 3 Points, presented by Recycle BC ♻️#VWFC | #MTLvVAN | @RecycleBC pic.twitter.com/NcnYdfV3Pd

And their good streak could continue Saturday in MLS Week 7 against a Whitecaps team that is just 1-1-4 on the year. On the road, Vancouver is 0-0-3 with just two goals scored and nine conceded. They’ve only scored five times overall this campaign.

The teams played once last season, a 2-0 home win for Vancouver.

Both of these teams are severely underperforming their expected goals against (xGA) thus far.

“This team has massive potential to do something good this season. We’ve strung some wins together and we want more.” – @16Waterman >>> https://t.co/uODCi1jOMO#CFMTL pic.twitter.com/MCdb47cBlw

Montreal hasn’t kept a clean sheet yet this season and that may in fact continue in MLS Week 7 (both to score at -134 odds). Considering they’ve scored multiple goals in each of their past three and all on the road, that trend could continue as they finally return home.

Two teams separated by just two points in the West meet at 6:00 pm EST on Saturday in MLS Week 7. The Dynamo are sixth with 11 points, while Portland are eighth with nine points. Both teams have scored ten goals, with Houston allowing seven and Portland 13.

In three meetings last season Portland recorded 2-1 and 2-0 wins, while the teams split the points in a 2-2 draw in the other. Overall, both teams have scored in 7/9 recent meetings and in 14/18. In 6/8 Over 2.5 totals bets would have cashed. In 3/4 the Over and both teams scoring would’ve put money in your pocket.

Scoring hasn’t been super high in the MLS or the West this season. But Portland’s free-wheeling style has amounted to plenty of goals. The Timbers both press and are pressed against the most of any team. They rank second in pressures while ranking sixth in pressures against.

They are 4-3 to the Over and are one of only four teams in the West to have played to more Overs than Unders.

The Timbers are coming off a 3-2 road win in Vancouver last week. That was the sixth time in seven matches that both teams have scored in their matches this season.

For Houston, they won a wild one at home last week, 4-3 to San Jose. They’ve now scored seven goals across their past two as they won 3-1 in Miami the match prior. Both teams have scored in each of their past four.

This could be the most exciting match of the weekend when it comes to goalscoring, and I’ll back goals from both and at least three.

Who you taking this weekend?

Los Angeles had an unblemished record heading into their Week 6 showdown with rivals the Galaxy in El Trafico.

And while they fell in defeat 2-1, that record came close to remaining in tact, if not for their tying goal being called back for an offside VAR decision.

Regardless, they are now 4-1-2, and still sit atop the Western Conference standings and leading in the MLS Cup odds. In their three home matches they are 2-1-0, with seven goals scored compared to just two conceded.

It’s not been a good start to 2022 for Peter Vermes and Sporting KC. They have just two wins in seven matches, both 1-0 wins at home. Their last home match though, last week versus Nashville, resulted in a 2-1 defeat. Away from Children’s Mercy Park, they’ve been dreadful, losing four and being outscored 10-2.

Coming off the disappointment of losing in El Trafico, LAFC will want to get back on track quickly, and SKC should be the opponent to do so against

A win where LAFC scores at least twice looks quite possible.