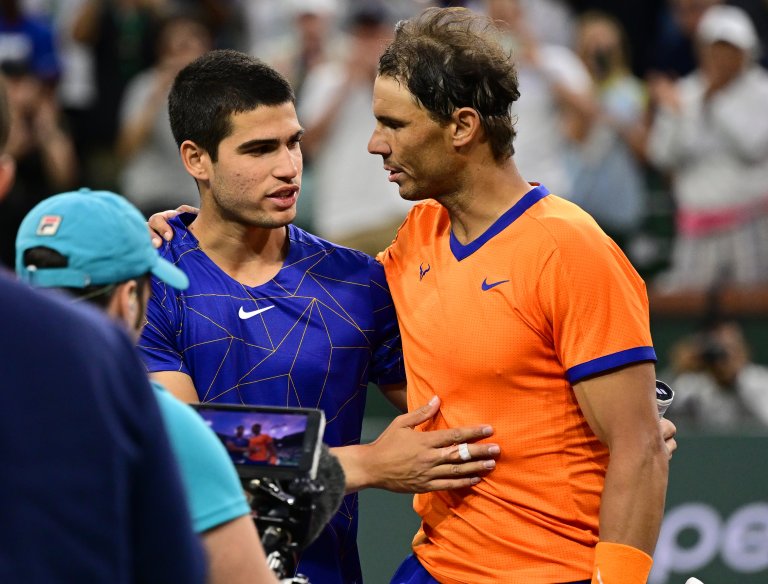 Having seven of the top eight seeds reach the quarterfinals in Madrid is a first in the tourney’s history
The Madrid rematch of the legend Nadal vs his successor Alcaraz is the spotlight match – with pick-em odds
Read on as we break down the final eight in Madrid, and make some predictions

It is the first tournament since last year’s French Open featuring both Novak Djokovic and Rafael Nadal.

The two millennials are joined in the quarterfinals by a group of Gen-Z aspirants who, so far, have been unable to break the glass ceiling they’ve created.

At the same time, the two legends are not in top form.

Djokovic is still trying to work his way back from missing much of the year because his unvaccinated status.

Nadal is just back from a two-month injury break.

Odds as of May 5 at BetMGM.

Djokovic caught a break when fellow 30-something Andy Murray had to withdraw from their third-round match Thursday because of a bout with food poisoning.

He’ll be fresher. But it also robs him of needed match time as he faces Hubert Hurkacz of Poland.

Their last meeting, on an indoor court in Paris last fall, came right down to the wire.

Djokovic is a strong favorite, but he could be in for a battle.

Wins over Alexander Zverev have been pivotal moments in Félix Auger-Aliassime’s young career.

He won his first five-set match, and made his first Grand Slam quarterfinal at Wimbledon against Zverev last summer.

With 4 hours & 7 minutes on the clock, Felix Auger-Aliassime gets his first win in a 5-setter, his first win over Alexander Zverev in four attempts and reaches his first #Wimbledon quarterfinal.

After a poor end to 2021, the Canadian defeated Zverev at the ATP Cup in January. It was a must-win match in a run that ended up with Canada winning the ATP Cup.

It propelled him to a quarterfinal at the Australian Open. And then, after nine failed attempts, he won his first career ATP Tour title a few weeks later in Rotterdam.

Auger-Aliassime came into Madrid in a terrible run of form during the clay-court season.

But perhaps the quicker conditions at altitude have helped. He has lost just six games in two matches against quality opponents: Chile’s Christian Garin and No. 10 seed Jannik Sinner.

Zverev’s form was even worse.

And there’s little evidence it’s getting better. He struggled in dispatching Marin Cilic in his opener. Lorenzo Musetti retired from their match on Wednesday.

And yet, Zverev is the clear betting favorite in this one, even if we think Auger-Aliassime could ride the wave this week for at least one more match.

A year and a day after their first-ever meeting – also in Madrid, and on Alcaraz’s 18th birthday – the legend and the legend-in-waiting meet again.

This time, it’s in the quarterfinals, not the second round. This time, the 18-year-old has just turned 19. And he’s also just won the Miami Open and the Barcelona Open.

This time, Nadal will be straight off a three-hour, eight-minute marathon win over David Goffin Thursday that had him up 6-3, 5-3, with a match point – one swat away from a nice 90-minute workout.

The match against Alcaraz, who had a 2-hour, 39-minute battle of his own Thursday night, is one of those highly-anticipated ones on paper that may well not play out on the court.

Nadal himself even said he knows he is not going to feel great on Friday and has few expectations. Of course, he does that sometimes.

In other words, the Mallorcan will fight like heck to win. But he isn’t expecting much from himself.

Maybe he’ll have one good set in him. Maybe.