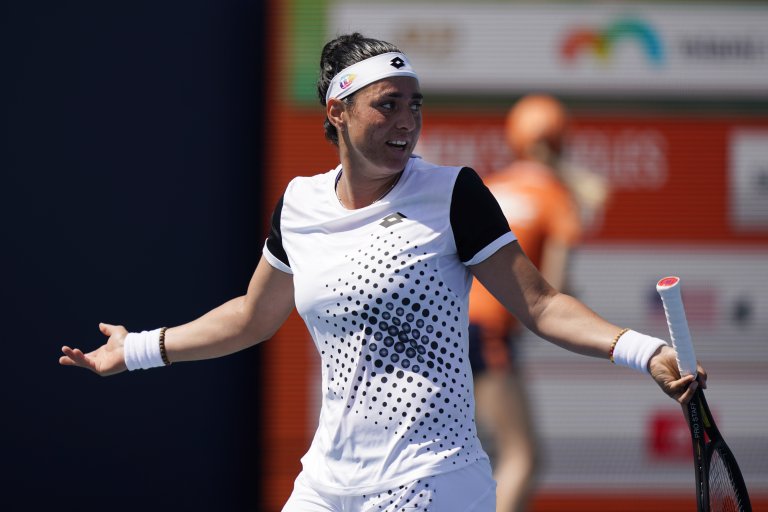 Ons Jabeur was down a break in the third set Saturday vs Anisimova in Charleston, but pulled through
Belinda Bencic continues her run of form the last few weeks and looks for her fifth career singles title
The Charleston final will be played Sunday at 1:30 pm ET. Scroll down for analysis and predictions

Two of the most in-form players in the 56-player Charleston Open field have made it to the final.

So it’s no surprise that the odds are so close, with Ons Jabeur – one of the pre-tournament favorites – the slight favorite over Belinda Bencic, the lower seed.

Odds as of April 9 at Barstool Sportsbook

Just turned 25, this will be Bencic’s 14th WTA-level final. She has four titles, most recently the Olympic gold medal in Tokyo last summer.

Jabeur, less precocious but the junior French Open champion at age 17, will be playing in her fifth career final.

The 27-year-old has just one title, on grass in Birmingham last summer.

Four of those finals have come in the last 12 months, beginning with a WTA 250, also in Charleston, played the week after the main event a year ago.

She also made the semifinals of the Charleston 500 a year ago. So she likes Charleston. And Charleston likes her.

Jabeur Squeezes Past Anisimova in Semifinal

Amanda Anisimova won the first set with style, fell apart in the second set, but was up a break in the third set of her semifinal against Jabeur Saturday.

But the battle on the court was not only about tennis, it was also about attitude and body language.

In the end, Jabeur prevailed on both counts. But it was a draining effort.

In evidence was Jabeur’s supreme drop shot. It worked fairly well even after Anisimova began anticipating it.

But Bencic moves better than Anisimova does. And her fighting spirit is going to be at a higher level as well. She’ll get annoyed – at herself, and if her opponent hits a nice shot. But generally she’ll remain on a more even keel than the 20-year-old Anisimova.

Something fairly serious was going to have to happen for Bencic to lose to Ekaterina Alexandrova in their semifinal.

Alexandrova had looked very good against Magda Linette the previous day; but Linette was diminished physically by doing double-duty the previous day and helped her out a fair bit.

Bencic saw an unseeded opponent standing in her way, and mowed her down.

It took just an hour and 18 minutes.

Even if she faced three break points (saving two of them), the outcome was rarely in doubt.

Alexandrova arguably has a better, more powerful first serve than Jabeur, but has less variety and spin on the second delivery.

Jabeur and Bencic have only met once before. But it also was on clay, nearly a year ago in Madrid (at a bit of altitude).

The ranking roles were reversed; Bencic was No. 11 in the world at the time while Jabeur, who hadn’t yet gotten this second wind in her career, was at No. 25.

It was close all the way. But Jabeur ended up retiring midway through the second set with a right hamstring strain that also took her out of Rome the following week.

That tournament was played behind closed doors, though, with no atmosphere. This final should have a full or near-full house. And a shotmaker like Jabeur is in her element in those conditions.

But … she had the tougher match Saturday. And, playing the second semifinal, will have a few hours’ less rest before this final.

Still, what Jabeur let get away in Charleston a year ago – twice – she will be determined to bring home this time.