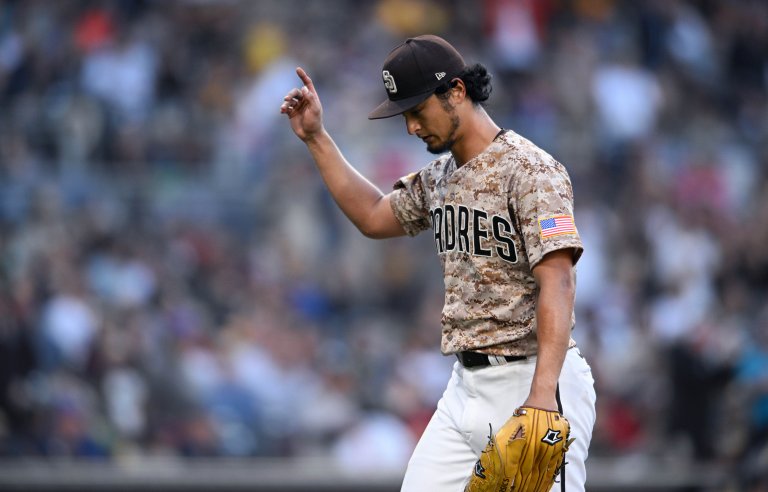 The Padres are -165 road favorites over the Pirates on Friday night
Yu Darvish (1-1, 4.43) will start for the Padres against Zach Thompson (0-2, 10.80)
A look at the Padres vs Pirates odds and matchup can be found below with a pick

Two teams having very different weeks meet when the San Diego Padres visit the Pittsburgh Pirates at 6:35 p.m. ET Friday in the opener of a three-game series at PNC Park.

The Padres (13-7/7-3 road) are coming off a three-game sweep of the Reds in Cincinnati that ended Thursday with an 7-5 victory. The Pirates (8-11/4-5 home) were swept at home by the Milwaukee Brewers in three games, including losing 3-2 on Thursday.

Odds as of April 28th at BetMGM.

The Padres are -165 favorites, giving them an implied win probability of 62.26% The temperature is expected to be 62 degrees at first pitch with calm winds and partly cloudy skies.

Darvish was outstanding his last time out Saturday in a no-decision against the Los Angeles Dodgers at home, pitching one-hit ball over six shutout innings. He struck out seven and walked three.

Darvish’s season statistics are skewed by a nightmarish outing against the Giants on April 12 in San Francisco in which he was hammered for nine runs in 1.2 innings. He has allowed one run total in 18.2 innings in his other three starts.

Reserve outfielder Jake Marisnick could be in the lineup as he is 3 for 8 off Darvish with a double. Meanwhile, Bryan Reynolds is 1 for 10 with four strikeouts, though his one hit is a home run, and Roberto Perez is 1 for 8.

Thompson has struggled mightily after being acquired from the Miami Marlins in an offseason trade and had a nightmarish outing last Friday against the Cubs in Chicago. He was rocked for nine runs (four earned) and nine hits in two innings with two walks and one strikeout.

Zach Thompson gets Oneil Cruz swinging. Thompson is one of the laundry list of candidates for the starting rotation. pic.twitter.com/wy1zw6eQad

Thompson’ short track record against the Padres is also bad as he has lost both starts with a 7.00 ERA.

Ha-Seong Kim’s three-run double in the sixth inning broke a 2-2 tie and the Padres went on to beat the Reds on Thursday. Kim had two doubles among his three hits and finished the series with five RBIs.

Eric Hosmer went 2 for 4 to lift his batting average to .415, tops in the major leagues. Jorge Alfaro drove in two runs.

The Pirates had a tough loss Thursday when closer Chris Stratton could not hold a 2-1 lead, giving up a two-run double to the Brewers’ Andrew McCutchen in the ninth inning.

The Pirates managed just six hits a day after being one-hit by five Milwaukee pitchers.

Backup catcher Andrew Knapp, who was scheduled to give Perez a break, was a late scratch from the lineup because of illness.

This the first meeting of 2022 between the teams. The Padres won the season series 4-3 last year.

All signs point to backing Darvish and fading Thompson in this matchup. Thus, the Padres are the way to go, even at a big number.