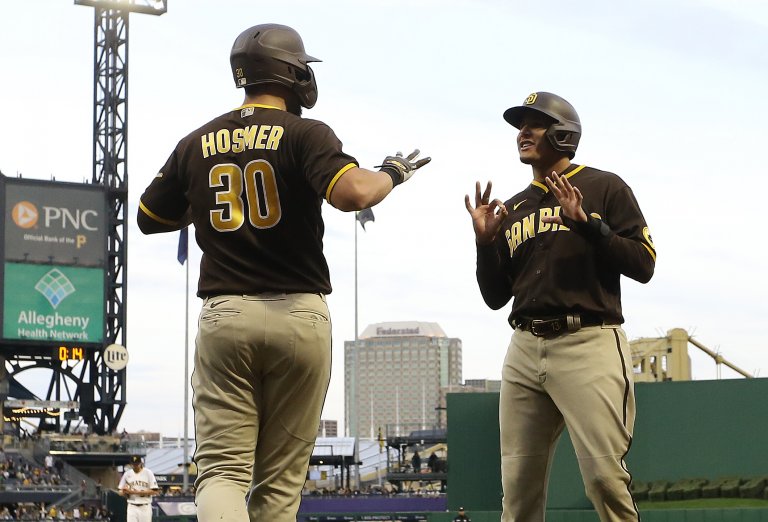 The San Diego Padres and Pittsburgh Pirates face off at PNC Park on Sunday, May 1st
Bob Melvin’s club tries to stay hot on its road trip and keep pace with the Giants and Dodgers in the NL West
Read below for the Padres vs Pirates odds and our betting preview

The San Diego Padres (14-8) face the Pittsburgh Pirates (9-12) on Sunday at PNC Park. The series finale has a scheduled first pitch of 1:35pm ET. The Padres will send Joe Musgrove to the hill, while the home team counters with Mitch Keller.

San Diego is a road favorite in this spot and has relatively short odds (+450) to win the NL West in the MLB Division odds, trailing only the Dodgers (-250) and Giants (+425).

Meanwhile, Pittsburgh is simply trying to finish over .500 in 2022 — something it has done only once in the last six seasons. The Bucs opened as +10000 longshots to capture the NL Central and still face those same long odds. Third-year manager Derek Shelton’s club is expected to win only 64.5 games (an NL low), while the Padres are projected to win 87.5 in expected victory totals.

Ke’Bryan Hayes helped snap Pittsburgh’s four-game losing streak (and San Diego’s four-game win streak) on Saturday after singling in the tying run and scoring the winning run on an error in the bottom of the 10th for a 7-6 win.

Odds as of April 30th at BetMGM

Musgrove has responded to high expectations this season in resounding fashion. All four of his starts have been quality ones and the Padres are 4-0 in his outings. He stymied the Reds in his most recent appearance on Tuesday. The 29-year-old scattered seven hits and allowed two earned runs and a walk while striking out four over six innings of an eventual 9-6 San Diego victory.

Keller has had the opposite fate Musgrove has enjoyed over his first four starts. The Buccos have gone 0-4 when the 26-year-old has gotten the call. Keller went 4.2 innings against the Brewers on Tuesday, allowing five hits, four earned runs and a pair of walks while striking out only one in a 12-8 loss.

The Padres were no doubt pleased with Musgrove’s first month. He tossed 25.0 innings, allowing 20 hits, six earned runs, only two walks and 25 strikeouts — while allowing only a pair of home runs.  His four quality starts are the most in all of baseball and his ERA (2.16) and WHIP (0.88) both rank in the top 15.

The San Diego native is one of a handful of pitchers to throw six different pitches at least 5% of the time. So far in 2022, he’s one of the elite in the game.

As for Keller, the former second round pick by the Pirates is still trying to find his groove. In 17.2 innings this season, the Iowa native has allowed 22 hits, 13 earned runs and seven walks against 16 strikeouts

Despite these teams’ divergent fortunes over the last few seasons, the Pirates have shown an ability to hang with the Padres, splitting the last ten matchups.

Coming into Sunday’s rubber match, however, one trend certainly favors the road team: the Buccos have yet to have a starting pitcher record a win in 21 games this season. That ties the major league record to begin a season set by the hapless 1989 Orioles, when they started the year 0-21. Making things more challenging for Pittsburgh is Keller — who has gone 11 straight starts without winning at PNC Park. Then, there’s Eric Hosmer.

Eric Hosmer hits a three-run homer to give the Padres a 3-1 lead in the fourth inning.
It is Hosmer’s third homer of the season and third homer in five games.

The Padres have +1700 odds to get to the Fall Classic, while the Bucs are +40000 longshots in the World Series odds.

Considering Pittsburgh’s inability to win a start by Keller at home in nearly a year, San Diego — and their ace — is the pick in this spot.