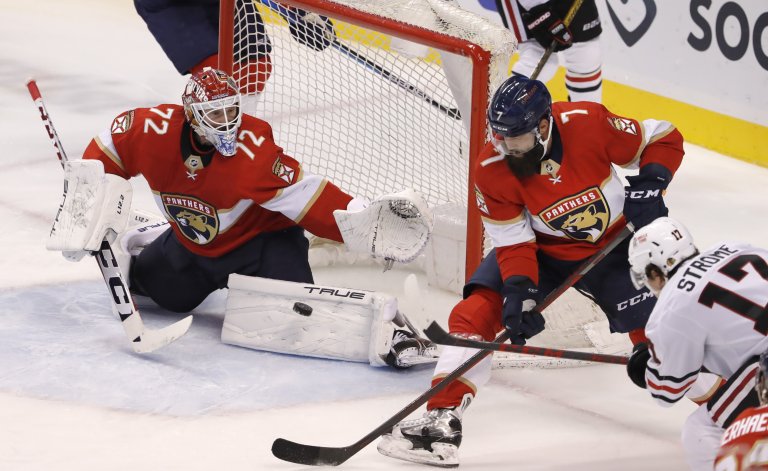 The Florida Panthers head to New Jersey to face the Devils from the Prudential Center at 12:30 PM ET
Sergei Bobrovsky is projected to start against Nico Daws
Read below for the Panthers vs Devils odds, prediction, and best NHL betting pick for Saturday

After an easy win against the Chicago Blackhawks on Thursday night, the Florida Panthers face the New Jersey Devils on Saturday, April 2nd. Puck drop is set for 12:30 PM ET at the Prudential Center. The game will be broadcast on MSG+, BSFL, and NHL Network. The Florida Panthers are listed at -210 odds, with New Jersey at +170 in the Panthers vs Devils odds. The Saturday NHL odds set Florida covering the puckline at +120.

Can the immensely favored Florida Panthers win on the road in New Jersey? Let’s see what the top NHL pick is for this matinee.

Odds as of April 1st at Caesars Sportsbook

New Jersey online sports betting markets set the Over at 6.5 (-125) in the Panthers vs Devils odds on Saturday afternoon.

While the New Jersey Devils are not playing that badly, they still do not have consistent enough team defense and goaltending.

Currently, New Jersey holds the last spot in the Metropolitan Division and are 14 games under .500. After losing seven of their last ten, they are still 24-38-5 on the season and battling with Philadelphia for the basement.

New Jersey is a whopping 31 points out of the NHL playoff bracket. They were officially eliminated after Thursday night’s 8-1 loss to the Boston Bruins.

The New Jersey Devils are the fifth team eliminated from 2021-2022 playoff contention.

While Nico Daws has been good at times, the defense makes too many glaring errors to have no veteran goaltending. Andrew Hammond is still injured, therefore, it is what it is.

The focus for the New Jersey Devils shifts squarely to next season after being eliminated from postseason contention last night. Goaltending has been a major issue this season and finding a solution in net should be high on the offseason priority list. #NJDevils pic.twitter.com/oi93MHrmp0

There is no Vezina Trophy candidate here or even an average goaltender. However, Daws lately cracked as well. He’s yielded 18 goals in his last five starts. His save percentage has plummeted to .894 on the season.

A 7-2-1 run has kept the Panthers’ Stanley Cup odds around +550. They began 2021-22 at +2000 to win the Stanley Cup. With the acquisition of Claude Giroux, that has only helped the Eastern Conference leaders further.

There will always be a question mark whether Sergei Bobrovsky or even Spencer Knight can be leaned on in goal for the playoffs. However, right now, so far is so good.

Sergei Bobrovsky was 7-0 with two shutouts despite missing two weeks after being hit in the face with a puck.

Friday, he was named one of the NHL’s Three Stars for March. https://t.co/5slwytgMTn

Florida is nestled right behind the Colorado Avalanche for the best team in the NHL. They rank first in goals at 4.06 while allowing 2.89. Florida has six players with 49 or more points.

The Panthers have won three of the last four meetings over the Devils and have covered in every one of those contests. Florida remains big road favorites and Sergei Bobrovsky is 17-5-1 against New Jersey in his career.

Now, Florida has 98 points and leads the Eastern Conference due to a better points percentage. Florida is a solid 18-9-6 record away from home.

CATS WIN!! What a night…

Perfect send off to the road for the weekend. @FlaPanthers #TimeToHunt

At least, New Jersey possesses a good top-six featuring Jack Hughes. Hughes has 55 points (25 goals) in 47 games. His shots per game is close to four since coming back from injury. Jesper Bratt shook an early slow start to lead the team with 65 points in 62 games. After that, the bottom-six is pedestrian and again there’s the team defense and goaltending issues.

If New Jersey can trick Florida into playing their frenetic style without making too many mistakes, this could be quite a matinee. If not, Florida will run away with this game. The Panthers’ depth can shred the Devils repeatedly.

The approach with this afternoon weekend contest is not to overthink here. Take the Panthers in regulation and consider the puckline if it stays +115 or better.