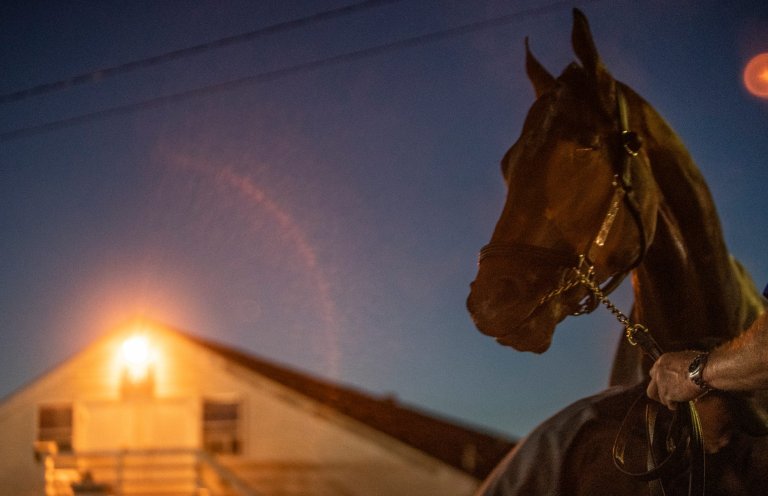 Kentucky Derby hopeful Messier is bathed on the backside of Churchill Downs following its first trip to the track. The former Bob Baffert trainee is being handled by Tim Yakteen due to Baffert’s suspension from the track. May 2, 2022

How will they like the longer distance? What if it rains? Can he handle the competition?

The Kentucky Derby offers many questions as horses are tasked with conditions they have not handled previously. Their lineage can help us guess whether they’ll adapt well.

How to bet on the Kentucky Derby best is a matter of opinion. There are plenty of places to play, but understanding the blood lines can go a long way towards handicapping a winner.

Odds taken May 2 at TVG

As we have gotten closer to the first Saturday in May, Kentucky Derby odds have fluctuated on Kentucky Derby betting sites. Let’s look at the Kentucky Derby favorites to consider and what their parents and grandparents say about them.

Epicenter’s father, Not This Time had a short but encouraging career. He was the favorite in the Breeders Cup Juvenile and finished second after winning the Iroquois Stakes at Churchill Downs. He was injured late in 2016 and did not race after his two-year-old season. Grandfather Giant’s Causeway won six Group 1 races in Europe and finished second in the Breeders Cup Classic in 2000.

On the side of the dam, Silent Candy won five times, including an allowance optional claimer at Churchill Downs. Grandfather Candy Ride was six-for-six and ended his career winning the Pacific Classic at Del Mar.

When you cost $1.7 million, the bloodlines ought to be good. Taiba’s dad, Gun Runner was the leading first-crop sire of 2021. Gun Runner earned $16 million winning 12 of 19 career races including the Breeders Cup Classic. He was third in the Kentucky Derby.

While the majority of her wins came in Ohio, Taiba’s buckeye-bred mom Needmore Flattery won 17 races. Her dad, Flatter, won four of six career races, including two at Churchill Downs. His bloodlines are regal on both side.

While his Empire state-bred mom Party Silks never raced, grandfather Touch Gold took the Belmont Stakes and Haskell Invitational in 1997. One of his most impressive performances came in a one-mile allowance race at Churchill Downs.

Though his father, Uncle Mo’s career ended on a negative note, with a 10th place finish in the 2011 Breeders Cup Classic, before that he won five of seven races including a pair of Grade 1’s as a two-year-old. Perhaps his biggest victory came in Louisville.

Callingmissbrown, Mo Donegal’s mom, won two of four races, with both victories in the Mid-Atlantic. Grandfather Pulpit finished fourth as one of the favorites in the 1997 Kentucky Derby. He won the Blue Grass Stakes.

While being an Ontario bred is very strange, only two Canadians have won the Kentucky Derby, Messier was a pricey yearling out of Belmont Stakes winner Empire Maker. He was second in the 2003 Kentucky Derby after winning the Florida Derby and Wood Memorial.

Mother Checkered Past won five races, all in Toronto. Her dad Smart Strike was six for eight in his career. Bred in Ontario, he won half his races in Canada but took the grade 3 Salvator Mile and grade 1 Iselin Handicap at Monmouth Park.

The final Kentucky Derby top contender is White Abarrio. His dad, Raceday, won two grade two stakes and a grade three during a 12 race career. He never won going more than a mile and an eighth. Raceday ran at Churchill Downs twice and won one of them. His father, Tapit was +640 in the Kentucky Derby but finished ninth.

White Abarrio’s mom, Catching Diamonds, was winless in three starts. Her dad, Into Mischief won a grade one race as a two-year-old and has led the North American sire list three straight years.