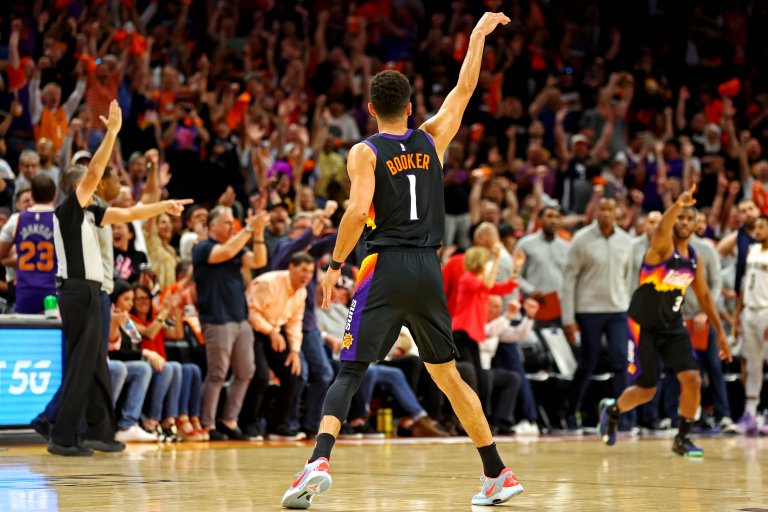 Apr 19, 2022; Phoenix, Arizona, USA; Phoenix Suns guard Devin Booker (1) reacts after a play during the second quarter against the New Orleans Pelicans during game two of the first round for the 2022 NBA playoffs at Footprint Center. Mandatory Credit: Mark J. Rebilas-USA TODAY Sports

The Phoenix Suns are out to +260 odds to win the Western Conference at FanDuel following news of Devin Booker’s hamstring strain
Brian Windhorst reports that Booker will miss two to three weeks
Is now the time to bet the Suns to win the West?

Devin Booker left Game 2 of Phoenix’s first round series with New Orleans with a hamstring issue. According to Brian Windhorst, this is a Grade 1 tear, ruling Booker out for two to three weeks.

Phoenix had sat atop the Western Conference odds for a long period, but news of Booker’s injury and his potential return date have bumped them out of top spot. FanDuel prices the Suns at +260 to return to the Finals, behind the Warriors at +145. DraftKings, Caesars and BetMGM still price the Suns as West favorites.

Odds as of Apr 21st at FanDuel Sportsbook

New Orleans has gone from nine seed to having a real chance at making the second round. The series heads to Louisiana tied at one win apiece on the back of a masterpiece from Brandon Ingram in Game 2. Booker was previously thought to be out for Games Three and Four, but it is now clear he will miss the entirety of the first round.

Phoenix went 8-6 without Booker last season. They got big postseason wins in 2021 with Chris Paul either unavailable or dealing with an injury. This is a team which has overcome adversity, and is still heavily favored to win this series, but this will not be straight forward.

Even if they do make it past the Pels, Phoenix will be facing the start of the second round against Utah or Dallas without Booker. The Conference Semifinals are due to start at some point between April 30th and May 3rd – even the lower end of this range wouldn’t see Booker return until May 5th.

Point God Must Take Over Again

Chris Paul was at his dominant best in Phoenix’s Game 1 win, dropping an efficient 30 points with 10 assists. Monty Williams needs more of the same from the Point God if the Suns are to see off a Pelicans team with plenty of its own firepower in the shape of Brandon Ingram, CJ McCollum and Jonas Valanciunas.

The Pelicans have been a top 10 team at both ends of the floor since the All-Star break, but the Suns can still win this series without Booker. Even more responsibility falls to Paul to create for himself and others, though, with limited self-creation from the rest of the roster. It will be interesting to see what Cam Johnson and Mikal Bridges can do given some of the performances put in when Paul was out.

Booker averaged 27 points and five assists per game in the regular season. He was lights out before getting injured in Game Two. That’s a lot of production to compensate for. The Suns have the players to do it, but it is a big ask against a good Pelicans defense. If Williams opts to give Cameron Payne more minutes to help with playmaking, Phoenix’s defense is suddenly that bit more vulnerable.

Maybe the Suns see off the Pelicans without Booker. Maybe Jae Crowder goes on a trademark hot streak from three while Bridges and Johnson increase their offensive output. The Suns are probably still slight favorites to win this first round series, but it’s a different question in the second round.

Should Booker miss three weeks, he will miss at least two games against the Jazz or Mavericks. Dallas looks set to have Luka Doncic back by then. Even the dysfunctional Jazz will fancy their chances against the Suns without Booker. Of course, there is always a risk of reinjury if Booker is rushed back and he might not be his usual self upon his return.

This injury is a huge blow to the Suns’ chances of returning to the Finals, and it only reinforces the view that the Warriors are once again Western Conference favorites.