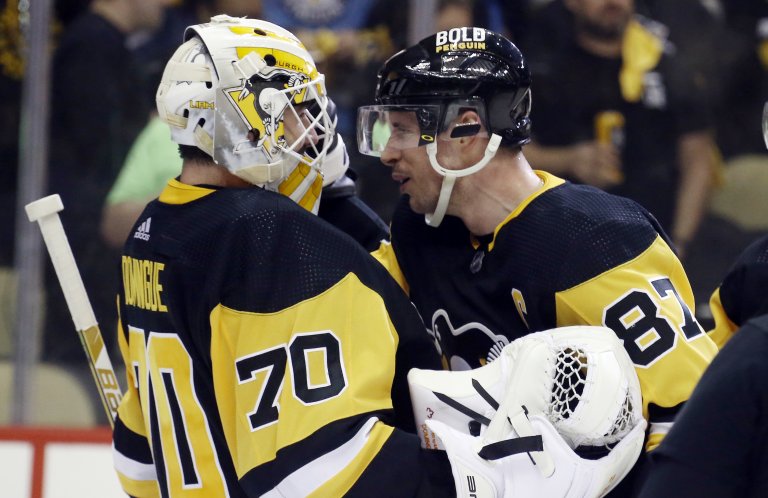 The New York Rangers are -115 road favorites over the Pittsburgh Penguins in Game 4 of their Stanley Cup Eastern Conference opening-round series on Monday, May 9
Pittsburgh is leading the best-of-seven set 2-1
Below, see the Game 4 Rangers vs Penguins odds and best bet

Logic and the the form charts are going out the window in this first-round Stanley Cup series between the Pittsburgh Penguins and New York Rangers.

Down to their third-string goalie, as the Penguins were edging the Rangers 5-4 in Game 3 of this best-of-seven set, it wasn’t career minor leaguer Louis Domingue of the Penguins who was chased from the net. No, it was Rangers goalie Igor Shesterkin, the -1750 favorite in the Vezina Trophy odds, who was grabbing some bench after allowing four first-period goals.

Oddsmakers are anticipating that Shesterkin and the Rangers will be regrouping for Game 4. New York is set as the slight -115 road favorite for Monday’s contest. The Penguins are 5-2 all-time in playoff series against the Rangers.

Odds as of May 8th at Caesars Sportsbook.

The puck will drop at 7:00 pm ET on Monday, May 9, at PPG Paints Arena. Tune in to ESPN for the broadcast.

The implied probability of victory for Game 4 displays the tightness of this season. The Rangers are given a 51-49% edge over the Pens.

In terms of the NHL betting trends, there are also mixed signals. Public betting shows that 83% of the bets placed against the spread are on the Penguins at +1.5. However, the moneyline splits display that 61% of the bets are on the Rangers at -115 odds. Surprisingly, 61% of the public bets are on the Under (6) even though all three games have gone over that total.

Rangers center Andrew Copp, a trade-deadline addition from Winnipeg, has scored in
each game of the series. He tallied three times in 34 playoff games for the Jets.

Pittsburgh has won three of its past four home playoff games against the Rangers and six of the last seven home games overall against the Broadway Blueshirts.

This is the point that puts Crosby ahead of Coffey on the all-time #StanleyCup Playoffs point list! pic.twitter.com/XJ8SRMjTit

The Penguins welcomed back forward Jason Zucker for Game 3. He was missing the first two games due to a lower-body injury. Goalies Tristan Jarry (lower-body) and Casey DeSmith (core muscle surgery) are out. Brian Dumoulin has missed the past two games with an undisclosed injury.

Perhaps it’s the wear and tear of playing a career-high 56 games. Maybe he’s feeling the stress of being the go-to-goalie in his first Stanley Cup series. Whatever the case, Rangers netminder Igor Shesterkin is clearly off his game. His 3.23 playoff GAA is more than a goal above his 2.07 regular-season number.

Mike Sullivan said the Penguins have to keep putting the pressure on Igor Shesterkin. “He’s not an easy goalie to beat. I think our guys so far have done a really good job at trying to create the net traffic and making the sightlines difficult for Shesterkin.”

Pittsburgh has been going to and succeeding in getting the puck through Shesterkin’s five hole. He allowed only seven goals between the pads during the regular season. That could be an indication that he’s a tired goalie.

Sure, there’s a romance to the story of Penguins goalie Louis Domingue. He’s only playing due to injuries to Tristan Jarry and Casey DeSmith. In nine pro seasons, the Pens are Domingue’s 13th team.

Louis Domingue said that moments like these were what he was dreaming of as a kid with his net in the street, in his rollerblades, cars driving around him.

“This is the film I was playing in my head the whole time.”

However, beyond the romantic element is the statistical reality. Domingue’s postseason GAA is 4.03. That’s not going to be conducive to success over the long haul. And there’s no other other option between the pipes beyond him.

The Rangers are 8-2 straight up in their last 10 road games. They haven’t dropped consecutive games away from home since early March.

Look for Shesterkin to be back on his game and for the Rangers to continue to exploit the weaknesses of the Penguins in their own end.

Goals have proven to be plentiful in this series, so the over of 6 is probably also worthy of consideration. Pittsburgh is scoring 4.33 goals per game, while the Rangers are potting 4.00 gpg.