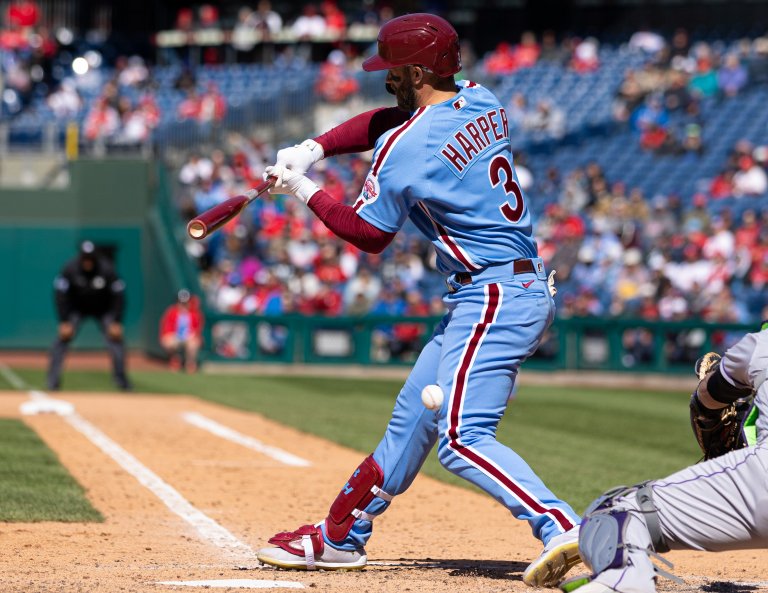 The Texas Rangers and Philadelphia Phillies face off at Citizens Bank Park on Tuesday, May 3rd
Joe Girardi’s club tries to stay within striking distance of the Mets, while the Rangers are hoping to get out of the AL West cellar
Read below for the Rangers vs Phillies odds and our betting preview

The Texas Rangers (8-14) face the Philadelphia Phillies (11-12) on Tuesday at Citizens Bank Park. The first matchup in the two-game series has a scheduled first pitch of 6:45pm ET. The Rangers will send Jon Gray to the bump, while the home team counters with Ranger Suarez.

Odds as of May 2nd at Barstool Sportsbook.

Philadelphia is a heavy home favorite in this spot, but has seen its odds move from +400 at the start of the season to +525 to win the NL East in the MLB Division odds, lagging behind the Mets (-113) and Braves (+165).

Meanwhile, free-spending Texas has also seen its division odds lengthen. The Rangers began the 2022 campaign as +4000 longshots to win the competitive AL West. Now, those odds are at +5000. Chris Woodward’s club is expected to win only 74.5 games, while the Fightin’s are projected to win 84.5 in the MLB win totals.

Texas just took two of three at home against Atlanta, while Philly lost two of three on the road against the Amazin’s. Each squad had Monday off.

Gray has had an inauspicious start to his Rangers career following signing a four-year, $56 million deal with the club as a free agent. He’s making his first start since April 19th on Tuesday after a stint on the injured list due to a knee sprain. In that outing against the Mariners in Seattle, the 30-year-old went five innings, allowing three hits, four earned runs and a walk while striking out four of an eventual 6-2 loss. Texas is 0-2 in his starts.

Meantime, the Phillies are 4-0 when Suarez gets the ball. The 26-year-old lefty is coming off his first quality start in four turns this season, going six innings and allowing seven hits, three earned runs and a walk while striking out three in a 7-3 victory over Gray’s former Colorado squad last Tuesday.

The Rangers are hopeful Gray can stay healthy after the Oklahoma native joined the club in the offseason. The 6-foot-4 starter proved he can perform, evidenced by a 53-49 and 4.59 ERA over seven years with the Rockies. But, Texas fans certainly want more than a 7.00 ERA over nine innings.

As for Suarez, the Venezuelan product hasn’t quite rounded into 2021 form (when he went 8-5 with a 1.36 ERA over 106 innings, including 12 starts in 39 appearances). But the southpaw has not allowed more than three runs in any of his starts and the Phillies are undefeated when he starts.

Obviously with interleague play, these two teams do not play each other very often. But when they have battled over the last decade-plus, Texas has gotten the better of Philly. When the Rangers spent half-a-billion dollars on the middle infield this offseason, they expected big things. Shortstop Corey Seager has been solid, hitting .271 with four homers and 12 RBI. But second baseman Marcus Semien has not. He’s slashing ​​.149/.224/.207 with a .431 OPS and no home runs.

Meantime, none of Philly’s big boppers (Bryce Harper, Kyle Schwarber, Rhys Hoskins) are blowing up early. But that could change quickly. And when it does — potentially against a pedestrian Rangers staff — watch out. Philadelphia has +2200 odds to get to the Fall Classic, while the Rangers are +12500 longshots in the World Series odds.

Considering Gray’s possible rust after a two-week layoff, a slumping Semien and a better starter, I like the home team in this spot for many reasons.