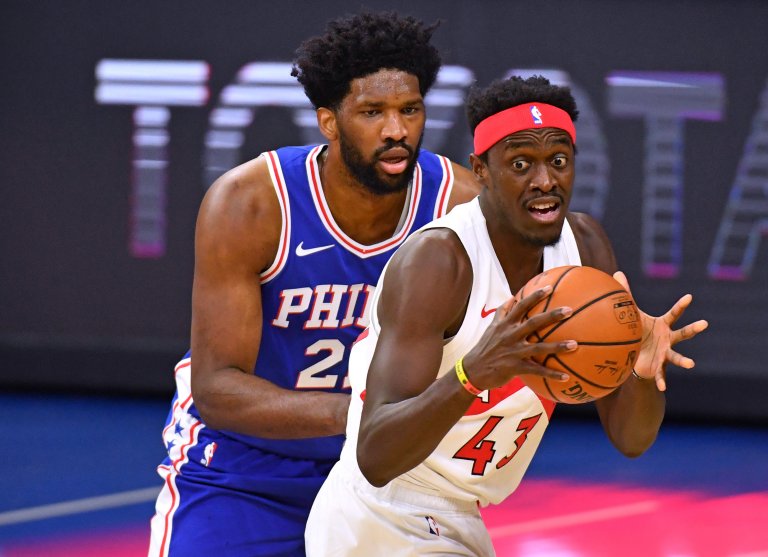 The 76ers are 4.5-point home favorites over Raptors on Saturday in Game 1 of their Eastern Conference first-round series.
The Raptors took three of four from the 76ers in the regular season
A look at the matchups and odds can be found below with a pick

The Toronto Raptors and 76ers begin their Eastern Conference first-round series at 6pm ET Saturday at the Wells Fargo Center in Philadelphia.

Odds as of April 15th at FanDuel.

The 76ers are 4.5-point favorites in a game that will be televised by ESPN. They have a 66.44% expected win probability as -198 picks on the moneyline.

The Raptors have plenty of scoring options as five players averaged at least 15 points a game in the regular season. They are also profitable on the road with a 25-15-1 record against the spread.

Pascal Siakim had a fine season with averages of 22.8 points, 8.5 rebounds and 5.3 assists.

Despite batting knee problems for much of the second half of the season, Fred VanVleet scored 20.3 points, dished 6.7 assists and made 1.71 steals a game.

Chris Boucher scored 21 points in the loss to the Knicks on Sunday. He figures to be more of a factor on defense in this series as he will likely guard 76ers star Joel Embiid, the NBA’s leading scorer this season.

GARY TRENT JR. WINS IT FOR THE @RAPTORS, WHO TRAILED BY 24! pic.twitter.com/6zlHJ99jol

The Raptors were 10th in defensive rating in the regular season, allowing 110.5 points per 100 possessions. Their 112.9 offensive rating ranked 14th.

The 76ers are just 17-24 ATS at home. They also lost dropped four games in a row against the number before coving the 6.5-point spread against the Pistons on Sunday.

Embiid averaged 30.6 points a game despite playing 33.8 minutes a game, the fewest minutes averaged in a season by the scoring champion in the shot-clock era. The native of Cameroon became the first international player to win a scoring title and first center since Shaquille O’Neal in 1999-00.

Embiid burnished his MVP credentials further with averages of 11.7 rebounds and 4.2 assists.

Acquired from the Brooklyn Nets at the trade deadline, James Harden has given the 76ers a second high-scoring player. He averaged 22.0 points, 10.3 assists and 7.0 rebounds.

Allen Iverson to Tyrese Maxey: “ain’t nobody stopping that” pic.twitter.com/rJ0WbGMZ3J

While the 76ers had the better regular season record, the Raptors took three of four games from Philadelphia, including both contests at the Wells Fargo Center.

The Raptors have showed they can not only beat the 76ers but do so in Philadelphia. That gives confidence in taking the points in Game 1.