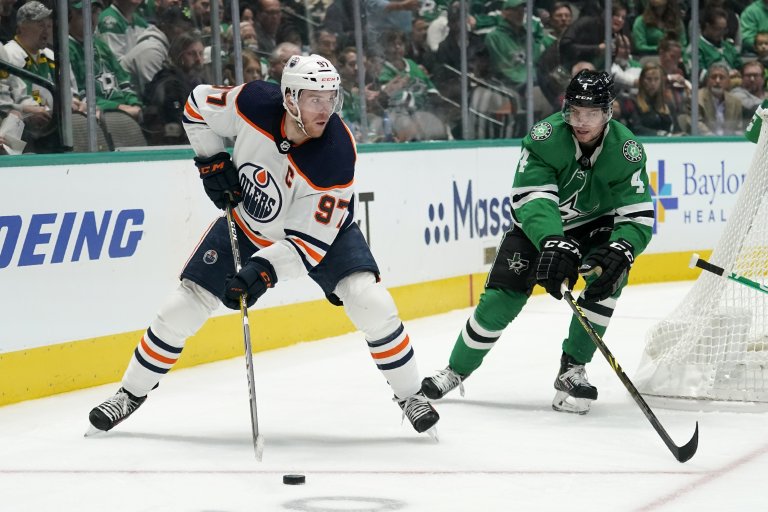 The Edmonton Oilers host the Dallas Stars on Wednesday, April 20th
The Oilers are listed as home favorites in the Wednesday NHL odds
Read below for Stars vs Oilers odds, picks and prediction

Wednesday Night Hockey features an NHL matchup between the Edmonton Oilers (44-26-6) and Dallas Stars (43-28-5) on April 20th. The puck drops at 8:30pm ET at Rogers Place. NHL Network will carry the broadcast nationally.

The Oilers are listed as -162 home favorites in the Wednesday NHL odds. The total is set at 6.5 for a matchup the features NHL leading scorer Connor McDavid.

Let’s take a look at the Stars vs Oilers odds and find the best bet for Wednesday Night Hockey.

Odds as of April 19th at Caesars Sportsbook.

The Oilers are listed on the puck line at +155 odds, while the Stars are -195 to keep the game within two goals . Edmonton’s -162 moneyline price means they have 59% implied probability to win.

The Oilers are favored to beat the Stars at home in the Wednesday NHL odds. Edmonton occupies second-place in the Pacific Division (94 pts) and are on the verge of clinching a playoff spot. Jay Woodcroft’s club is 8-1-1 in their past 10 contests.

The Oilers have one of the better offenses in the NHL led by Connor McDavid and Leon Draisaitl. The latest 2022 Hart Trophy odds list McDavid as the second-favorite at +400. McDavid leads the entire NHL in scoring with 42 goals and 110 points.

Leon Draisaitl is confident in the @EdmontonOilers 😤

Edmonton has the two former league MVPs in Draisaitl and Connor McDavid. pic.twitter.com/68ELAMU1xu

Defensively, the Oilers are doing a good job limiting quality chances. Edmonton has pitched back-to-back shutouts against Nashville and Vegas thanks in part to goalie Mike Smith. The veteran goalie is projected to start Wednesday as he aims to extend his shutout streak to three games.

Another element factored into Wednesday’s NHL betting line is Edmonton’s home-ice advantage. The Oilers are 24-12-1 at Rogers Place this season and tend to feed off the passionate atmosphere in their home arena.

The Stars are listed as +133 underdogs against Edmonton as they look to solidify their playoff chances. Dallas currently occupies the second Wildcard spot in the Western Conference with 91 points. Vegas and Vancouver are both within five points of Dallas.

Dallas has been up-and-down of late, posting a 5-3-2 record in their past 10 games. Rick Bowness’ team kicked off a three-game West Coast road trip with a tough 6-2 loss to Vancouver on Monday. The Stars are 19-18-2 on the road overall.

Dallas’ offense is nowhere near as dynamic as Edmonton’s, which is part of why they’re priced as underdogs. The Stars have a lethal top line featuring Jason Robertson, Roope Hintz and Joe Pavelski, but no other player has reached the 50-point mark.

The Stars do hold a defensive edge over Edmonton thanks to an elite blueline. The only concern is veteran d-man Esa Lindell sat out last game with an illness and is questionable for Wednesday. Dallas ranks 15th in GAA, while the Oilers are 18th.

With Vancouver riding a six-game winning streak and inching closer to Dallas in the standings, the pressure is on the Stars to secure a big road win over the Oilers. Dallas was able to win the first two meetings this season, but they were both played in Texas.

When you really crunch the numbers, the Stars do offer underdog value Wednesday. Dallas is fifth in expected goals over the past month, but only 18th in actual goals scored. This means the team is either getting unlucky or can’t finish chances. It’s likely a mixture of both.

The betting trends for Stars vs Oilers paint a clear picture of why this betting line is where it is. Edmonton is on a roll and doesn’t lose often at Rogers Place. The Stars, however, are typically good at rebounding from tough losses and are a solid road team.

The Stars are being a little disrespected with this betting line considering how well they’ve neutralized Edmonton’s lethal offense this season. Dallas is feeling the heat in the playoff race and should rebound with a strong performance versus the Oilers.

Back the Stars as road underdogs versus Edmonton in the Wednesday NHL odds.