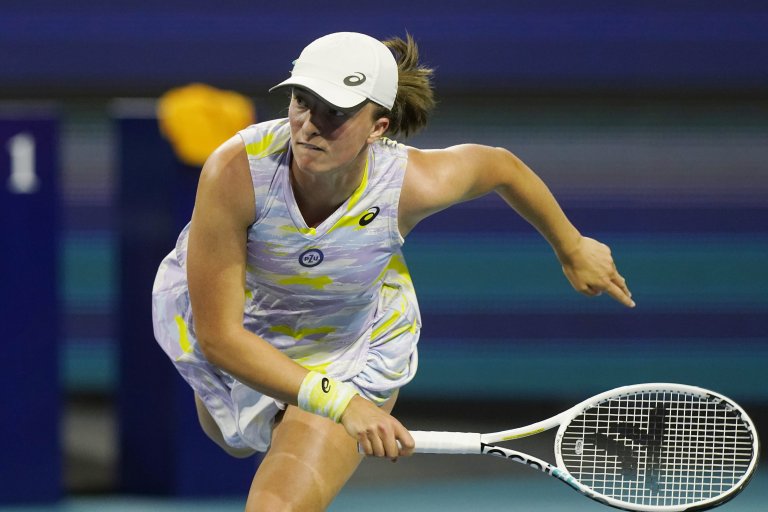 The top-three seeds have reached the Stuttgart Open semifinals, along with unseeded Liudmila Samsonova
World No. 1 Iga Swiatek is on a 21-match winning streak. Will it end Saturday?
Read on as we break down the matchups, the Stuttgart Open odds and make predictions

The top three seeds – but not the top three tournament favorites – have made it to the final four at the Stuttgart Open.

World No. 1 Iga Swiatek was the overwhelming pick before the start of the event, with No. 2 Paula Badosa trailing her.

Odds as of April 22 at BetMGM

Aryna Sabalenka wasn’t a big factor at the start of the week. But she was pushed to close to her best in her opener against Canadian Bianca Andreescu.

As for unseeded Liudmila Samsonova, ranked No. 31 in the world, she wasn’t even a speck on the radar.

The 23-year-old from Belarus was under .500 on the season, plagued with serving woes and a little short on confidence.

But her three-set win over Andreescu, ragged as it was, pushed her to a level of tennis not often seen in 2022.

And she rallied equally well against No. 5 seed Anett Kontaveit Friday, after again dropping the second set.

It ran a nearly identical pattern to her quarterfinal against the Estonian a year ago on the same court. But Kontaveit is a far more accomplished player a year later, while Sabalenka isn’t playing nearly as well.

Meanwhile, Badosa had a tough one Thursday against her good friend Ons Jabeur.

She could easily have lost it in straight sets. She won fewer points and didn’t play as well as her opponent.

But somehow, she did what she had to do to win.

And as a result, she will move to a career high No. 2 next Monday.

Their two previous meetings came on hard court last year. And on paper, Sabalenka was both the better hard-court player. She also was the higher-ranked player.

“You all know clay is my favorite surface, but that also makes it tricky because maybe they think you are even more favorite and now they play better against you.”

Why the clay swing will be the next evolutionary step for Swiatek, Badosa, Sakkari.

The odds belie those considerations; it’s basically a dead heat.

Both have had two three-setters to get to this point.

Doubles partners for the week, the two also withdrew from that event after winning their opening match. The better to save energy for what should be a real battle.

Swiatek already was the overwhelming favorite to win the Stuttgart Open.

Having an unseeded, lower-ranked player in the semifinals only improves the likelihood that she will pull off her fourth consecutive tournament win – her first since becoming world No. 1.

First Meeting Between Swiatek and Samsonova

Samsonova, born in Russia, lived in and represented Italy during her junior career.

Now Russian again, she reached her career high of No. 30 after Indian Wells and now sits just one spot below that.

The 23-year-old dropped a 6-0, 6-0 decision on first-round opponent Chloe Paquet. She took advantage of a worn-out Karolina Pliskova in the second round. And she had a good draw in rusty wild card Laura Siegemund in the quarterfinals.

So it couldn’t have been a better draw for her.

The World No. 1 kept her winning streak(s) alive with a 6-4, 6-4 victory over Emma Raducanu in the quarterfinals of Stuttgart today.

She hasn’t lost a set—or even been pushed to a tie-break—since Indian Wells.

Swiatek has had a lot to deal with, after winning the “Sunshine Double” in Indian Wells and Miami, and becoming world No. 1 with the shock retirement of Ashleigh Barty.

But you couldn’t tell on the court on this week.

But No. 8 seed Emma Raducanu, in her first WTA-level tournament on clay, did better than many expected in pushing her to a 6-4, 6-4 win. Swiatek’s level was … not to her recent standard.

This one should prove fairly routine, although those odds seem very, very high.