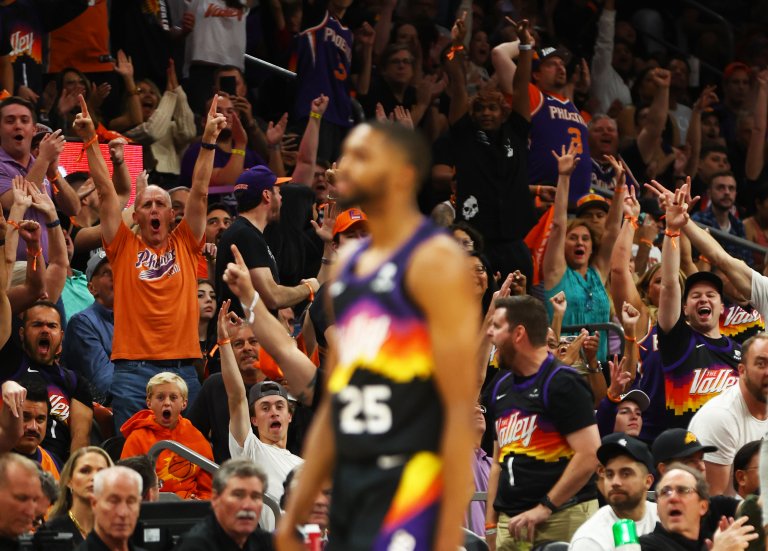 Apr 26, 2022; Phoenix, Arizona, USA; Phoenix Suns fans celebrate a shot by Mikal Bridges against the New Orleans Pelicans in the second half during game five of the first round for the 2022 NBA playoffs at Footprint Center. Mandatory Credit: Mark J. Rebilas-USA TODAY Sports

The Phoenix Suns will try to move on in the NBA Playoffs when they visit the pesky New Orleans Pelicans at 7:30 p.m. ET Thursday in Game 6 of their Western Conference first round series at the Smoothie King Center.

Top-seeded Phoenix took a 3-2 lead in the best-of-seven series Tuesday by beating the No. 8-seeded Pelicans 112-97.

Odds as of April 27th at FanDuel

Phoenix are two-point favorites in a game that will be televised on TNT, with their implied win probability at 55.75% as -126 choices on the moneyline. Louisiana online sports bettors are hoping the home side pulls off the upset.

Mikal Bridges had arguably the best game of his career in Game 5 as he finished with a season-high 31 points. He did not score more than 27 points in any game during the regular season.

A finalist for NBA Defensive Player of the Year, Bridges had a career-high four blocked shots and two steals to go with five rebounds. He was also an ironman as he logged 46:54.

Bridges helped pick up the scoring slack for injured Devin Booker, who missed his third-straight game with a strained right hamstring. Booker has been working out at the Suns’ practice facility and there is an outside chance he could play Thursday.

However, getting Booker back in Game 7 might be a more realistic scenario. He was eighth in the league in scoring with a 26.8 average during the regular season.

Chris Paul bounced back from a bad game with 22 points, 11 assists, six rebounds and three steals. In Game 4, he scored four points, the lowest figure in a playoff game in his career.

Since the NBA went to its current playoff format in 2003, just four No. 1 teams have been pushed to a seventh game in the opening round and the Suns are trying to avoid joining that club.

Phoenix is 26-17 against the spread on the road this season.

McCollum had 21 points, eight rebounds and five assists. However, he shot just 7-of-22 from the field and made only 1-of-8 three-point attempts.

Suns’ Mikal Bridges with a block on Pelicans’ CJ McCollum in the third. pic.twitter.com/ZELocJWTPm

Brandon Ingram scored a team-high 22 points to go with five rebounds and five assists. He was just 7-of -19 from the floor, though, and 1-of-5 from distance.

New Orleans scored only one field goal in the last five minutes and none in the final three minutes.

Jonas Valanciunas had a double-double with 17 points and 14 rebounds. The Pelicans got 12 points off the bench from Jose Alvarado.

Jonas Valanciunas caught a fire in the fourth pic.twitter.com/Nj2un3fKrw

The Pelicans have nothing to lose in this situation. They were 10 games under .500 in the regular season and playing with house money certainly fits.

That’s why it feels right to give the lean to New Orleans, especially playing at home.