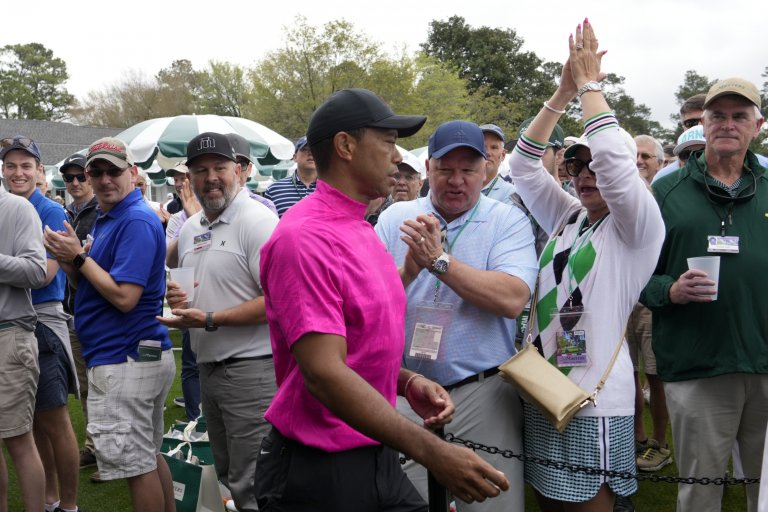 Spectators cheer as Tiger Woods heads to the first tee during the first round at the Masters golf tournament on Thursday, April 7, 2022, in Augusta, Ga. (AP Photo/Charlie Riedel)

Tiger Woods is four shots off the lead at the Masters after an opening round 71
The five-time Green Jacket winner is now +3600 to win the tournament, after opening with odds of +5500
See below for analysis on whether Tiger is a good bet to win at his new price

Given what he’s accomplished over the past two decades at Augusta National we really shouldn’t be surprised by what we saw from Tiger Woods in the opening round of the Masters. Woods carded a 1-under round of 71 on Thursday to sit tied for 10th, in his first regular PGA tournament in a year and a half.

Odds as of April 7th at FanDuel Sportsbook.

Tiger teed off with +4500 Masters odds to win his sixth Green Jacket, after opening as long as 55-1 depending on where you look. He’s now down to +3600 in the outright market, which remains well behind the current tournament favorites.

Tiger Dazzles in Opening Round

Playing in his first tournament since a horrific car crash that nearly cost him his leg last year, Tiger shook off some early rust to make the turn at even par. He took it to red numbers after a birdie on 13, and following a bogey on 14, he sent the crowd into a frenzy on the Par-3 16th.

Woods has clearly lost some pop off the tee, but was able to keep it in play by hitting heel spinners which he can control. His irons were sharp, highlighted by a gorgeous shot on 6, while his putting was dialed in all day. If there’s a red flag so far it’s his around the green play. He managed to get up-and-down seven times on Thursday, but only thanks to his putter. He left himself lengthy par putts on numerous occasions as a result of some poor chipping and pitching.

Tiger mentioned following his round that he hit it terribly on the range Thursday morning, but considering he beat his career 1st round scoring average at Augusta (71.8) he must be feeling pretty good.

Woods sported -110 odds to make the cut prior to teeing off, a number that now looks like a gift from oddsmakers. Advanced analytic sites project Friday’s cut to be at +4, which means Tiger would have to shoot 77 or worse in the 2nd Round to trunk slam.

Tiger Woods is in the mix after round one of the #TheMasters pic.twitter.com/az78AP4div

Considering he’s only ever failed to break 77 once in 23 years playing at Augusta, it seems safe to assume he’ll be around for the weekend barring injury. On that note, Woods looked relatively healthy for most of the 1st Round, grabbing at his back and using his driver as a cane just one time a piece.

The only other thing that could seemingly derail his weekend prospects is the weather. The Friday PM wave which he is apart of will deal with 17mph winds and gusts north of 30mph, about twice as strong as the morning tee times.

All the Best MLB Sports Betting Promos for Opening Day

An incomplete list of the golfers Tiger Woods beat today

However, those numbers were before his recent car crash that nearly destroyed his golfing career. Tiger may feel like he can win, and sure he’s won on one leg before at the 2008 U.S. Open, but the talent in this field is unlike anything he’s ever competed against over four rounds.

There’s no way an outright bet on him in his current condition against this group of competitors would be considered a plus expected value wager. But that doesn’t mean there aren’t other markets to target him in.

He’s currently +100 to finish the tournament inside the Top-20, and +115 to beat Tony Finau straight up on Friday. Both of those wagers seem like smarter ways to spend your money.