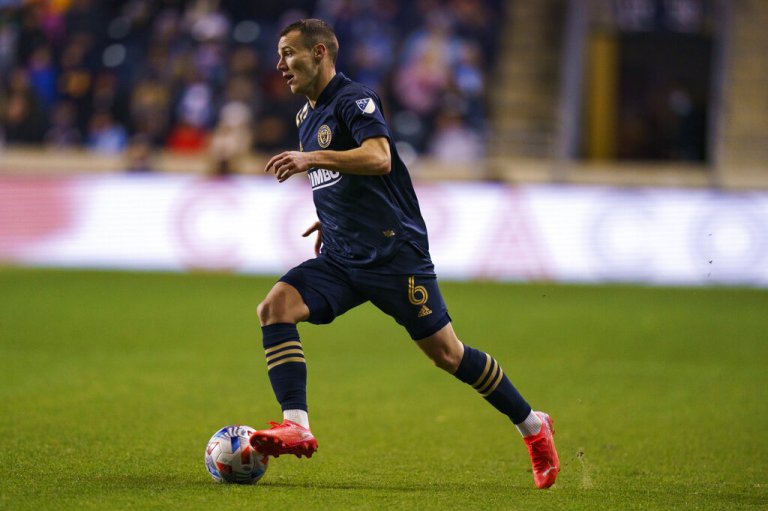 Philadelphia Union’s Deniel Gazdag in action during the second half of an MLS playoff soccer match against the Nashville SC, Sunday, Nov. 28, 2021, in Chester, Pa. The Union won 2-0 in the penalty kick shootout after tying 1-1 in regulation time. (AP Photo/Chris Szagola)

Two teams in very different stages of their development lock horns at Toronto’s BMO Field on Saturday night. With the 2020 Supporters’ Shield already in its trophy cabinet, the Union are trying to add another and have made a convincing start to 2022, winning five and drawing its other game to move into the top five in the MLS Cup odds.

Meanwhile Toronto is in the early stages of the Bob Bradley experiment, with the well-travelled American coach attempting to bring the luster back to Canada’s most successful soccer club, with the team looking to push its unbeaten streak to four games in Week 7 of the MLS season.

Odds as of April 16th at Barstool Sportsbook

As the lone remaining unbeaten team in MLS, Philadelphia has been rolling in 2022, rattling off five wins and one draw, and the bookies expect that form to continue here. But it won’t be a slam dunk, as the +123 odds of an away win indicate. And with Toronto FC starting to turn the corner under new head coach Bob Bradley, the +240 odds of a draw look enticing.

With odds of -129 on an over of 2.5 goals, goals are expected here, which might not be too surprising given that the two teams have combined for 19 goals between them in six games. Significantly though, Toronto has had trouble keeping them out of their net, conceding 11 so far – and has allowed at least one goal in a club-record 18 straight home games – while Philadelphia has easily the best defensive record in MLS, conceding just two.

Additionally, if you think TFC can make home-field advantage count against the early Supporters’ Shield leaders, you could back them at +220 on the spread at -0.5. For more on how that works, read our article on Asian Handicaps and point spreads.

After beginning the year taking just one point from the opening three games, TFC seems like it has turned a corner, going unbeaten in its past three, and winning both of its games at home, most recently a 2-1 victory over defending MLS Cup champion New York City FC.

Roll it back 📼 Here is today’s highlights! #TORvNYC | #TFCLive pic.twitter.com/nAx7RP8puY

While new striker Jesus Jimenez has provided the desired cutting edge up front, scoring three goals in his fledgling TFC career, it is the younger players upon which any TFC turnaround will hinge. Academy graduates Kosi Thompson and Jayden Nelson, both 19, found the net last week, and Toronto will need more of the same from the likes of Ralph Priso and Jacob Shaffelberg to maintain any upward momentum.

A couple of Homegrowns doing us proud 🍁

The kids are alright | All For One: Moment presented by @Bell#TFCLive pic.twitter.com/a5ChwvRtdG

While Philadelphia is the lone remaining unbeaten squad in MLS, its sizzling run of form actually dates back to last season, with the team last losing on September 19, 2021, and picking up a a league-best 35 points since then. Jim Curtin’s team will try to keep things rolling north of the border by extending its club-record win streak to a sixth straight game, and will also aim to keep a clean sheet for a fifth consecutive game.

If Philly is looking for goals, it knows exactly where to find them. With goals in four straight weeks, designated player Danial Gazdag is starting to find his feet in MLS, having already matched the total he scored in all of last season.

3️⃣ goal in 3️⃣ games in March & Daniel Gazdag was the @IBX Player of the Month!#DOOP pic.twitter.com/b4GiKeWqfb

With a leaky Toronto defense that has conceded almost two goals a game, combined with the absence of center back Carlos Saicedo, who is suspended after last weekend’s 2-2 draw in Salt Lake City, goals are a virtual certainty here.

Combined with Philadelphia’s recent run of form, it’s looking good for the Union, who are unbeaten in three straight matches against Toronto, losing just one of the last five to their Canadian rivals.