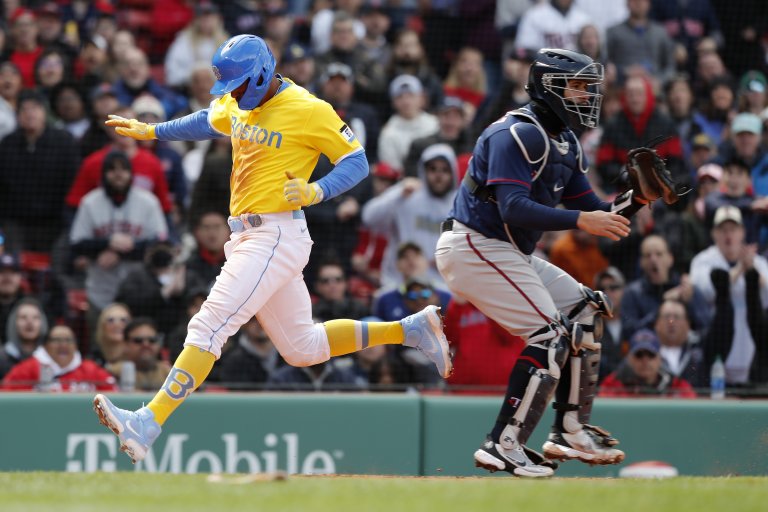 The Red Sox are -150 home favorite over the Twins on Monday morning
Left-hander Rich Hill (0-0, 6.23) will start for Boston against Dylan Bundy (1-0, 0.00)
A look at the Twins vs Red Sox odds and matchup can be found below with a prediction

It will be morning baseball in Boston as the Red Sox host the Minnesota Twins at 11:10 a.m. ET Monday in the annual Patriots’ Day game to conclude a four-game series.

Odds as of April 17th at BetMGM.

In a game that will be televised on MLB Network, the Red Sox are -150 favorites, giving them a 60% expected win probability. The weather forecast calls for increasing clouds, a high of 51 degrees and east winds at 5-9 mph.

Signed as a free agent in the offseason, Bundy had an outstanding debut for the Twins last Monday, pitching five scoreless innings and allowing one hit to beat the Seattle Mariners. He struck two and walked one.

Some thoughts on Dylan Bundy’s #MNTwins debut:
-Kept the ball in the park
-Decent pitch mix
-Fastball spin continued to be good pic.twitter.com/ab6izlrKdv

This will be Bundy’s first road start of the season. He went 1-5 with a 5.44 away from home in 12 starts last year while pitching for Los Angeles Angels.

Red Sox’ star Xander Bogaerts is 12 for 36 (.333) against Bundy with four doubles and three home runs.

Hill had a no-decision his first time out Tuesday against the Tigers at Detroit. He lasted 4 1/3 innings and was charged on for three runs on five hits with four strikeouts and one walk.

Despite being in his 18th season, Hill will be making his first career start against the Twins. He is 0-1 with a 9.53 ERA in eight relief appearances.

It should be an emotional day for Hill, whose died Friday, especially with the Boston Marathon being run at the same time he is pitching against the Twins. Lloyd Hill Sr. ran in 37 Boston Marathons.

Red Sox lefty and Milton native Rich Hill spoke to @RochieWBZ about his memories of his father running the Boston Marathon 37 times. Lloyd Hill Sr. passed away on Friday at the age of 94. https://t.co/YDrSF5ap9h pic.twitter.com/fTj9BT8JRO

Hill is making his first start of the season at Fenway Park but is 2-0 with a 1.65 ERA in 25 games (one start) there during his career.

The Twins’ Carlos Correa is 0-for-8 against Hill and Gio Urshela is hitless in five at-bats.

Trevor Story had his first two RBIs in his new home park as the Red Sox rolled to 8-1 victory over the Twins on Sunday. Story, who was signed to a six-year, $140-million contract as a free agent in spring training, hit a two-run double in a sixth-run eighth inning when Boston blew the game open.

The Twins were held to four hits, two by Urshela.

Minnesota center fielder Byron Buxton (knee) is expected to miss his third straight games after being injured Friday while sliding into second base in the series opener.

The Twins haven’t won the season series since 2015 and the Red Sox are 23-15 during the past seven seasons.

The Red Sox have a 71-53 record at home on Patriots’ Day, a holiday observed in Massachusetts and Maine that celebrates Paul Revere’s ride and the battles of Concord and Lexington.

It’s hard not root for Hill, one of baseball’s truly good guys, in this spot. But Bundy was impressive in his first start with the Twins and provides good value on the moneyline.