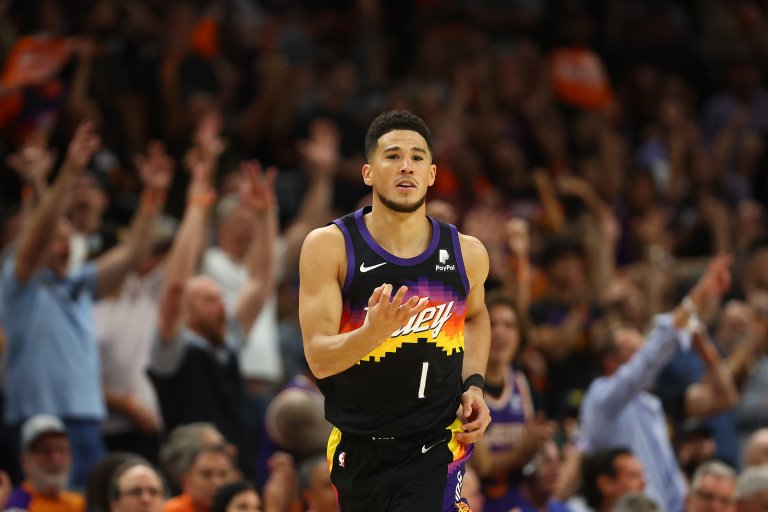 May 4, 2022; Phoenix, Arizona, USA; Phoenix Suns guard Devin Booker (1) reacts after scoring a basket against the Dallas Mavericks during the second half in game two of the second round for the 2022 NBA playoffs at Footprint Center. Mandatory Credit: Mark J. Rebilas-USA TODAY Sports

After play on Tuesday, every series in Round 2 of the NBA Playoffs has now crossed two games.

And with that, a new Finals MVP has emerged: Phoenix Suns guard Devin Booker.

His play has helped crumple the Dallas Mavericks and stake the Suns to a 2-0 series lead, even with Luka Doncic averaging 40 points in the two losses.

Over in the East, the top-seeded Miami Heat are up 2-0 on the Philadelphia 76ers, with Jimmy Butler sitting with +600 odds, tied in third spot with Booker’s teammate Chris Paul.

Let’s look at the latest Finals MVP odds, and sort out the bets you should be targeting.

Odds as of May 4 at FanDuel Sportsbook

At the start of Round 2, Devin Booker was sitting at +750 odds at FanDuel, but those numbers have shortened to +460. Book looks like he’s over that hamstring injury that forced him to miss games in the Pelicans series.

Devin Booker is on a scoring spree. pic.twitter.com/VGoIjrTwPP

On Tuesday night against the Mavericks, after putting up just nine first half points, he erupted for 21 in the second half for a team-high 30. He did a lot of damage behind the arc, drilling 5-for-8 from downtown.

Just a few notches below is backcourt mate Paul (+600), who is earning the reputation of Mr. Fourth Quarter in these playoffs. CP3 scored or assisted on Phoenix’s first 19 points in the final frame in Game 2, turning a close game into a 20-point blowout.

Paul and Booker have helped the Suns to shoot better than 50% in seven straight games.

Butler has been the clear offensive catalyst for the Heat. With Kyle Lowry missing the last four games, Miami has not skipped a beat. Jimmy Buckets starred again Tuesday, scoring 22 points, while adding 12 dimes and six rebounds.

He’s missed one game these playoffs with knee inflammation, but in the six games he has played, Butler is averaging 26.5 points, 7.6 rebounds and 6.0 assists while shooting 50.9% from the field.

Sitting alone in the 5-spot is Bucks’ star Giannis Antetokounmpo (+750), who, despite being hounded by a legit-stellar Celtics defense, is still stacking up stats.

One of the top choices in the 2022 NBA MVP odds, Giannis is averaging 26 points, 11 rebounds and 9.5 assists against Boston, though he’s only shooting 38.4% from the field.

He’s going toe-to-toe with Jayson Tatum (+750), meaning that one of the top-6 favorites to win Finals MVP will be guaranteed out by the start of the conference finals.

There’s one candidate outside the top 10 you have to consider. While the Sixers are reeling, their centerpiece should be back in Game 3 of their series with the Heat.

No one can ever question Joel’s toughness pic.twitter.com/9I0z5OS7DY

Joel Embiid is dealing with a fractured orbital bone and mild concussion, suffered in the Round 1 series clincher with the Raptors. This on top of a torn ligament in his thumb that he already was playing through.

Embiid, the likely regular season MVP winner, is one of just a handful of players that can swing a series all by himself. He sits at +8000 odds.

We should mention that Steph Curry started Round 2 as the favorite at +440 odds — and as low as +300 at Caesars Sportsbook — and he’s now looking up at Booker, in second at +500.

Curry could still very well claim his first-ever Finals MVP award, but with still no clear-cut NBA Finals pick, there’s just too much value further down the board to stay right at the top.

Whatever the Warriors need, Steph Curry will deliver 🙌pic.twitter.com/dsFe9qls7x

Embiid is definitely the most intriguing bet, and if he returns with a vengeance, and can help the Sixers hold home court, you won’t see his odds at this figure the rest of the playoffs.

For my money, however, I’d choose between the winner of the Bucks-Celtics series. Along with Miami, you’re looking at the top three defenses currently going in the playoffs, which always helps with an extended playoff run.

I’m leaning on the reigning Finals MVP to get it done again.