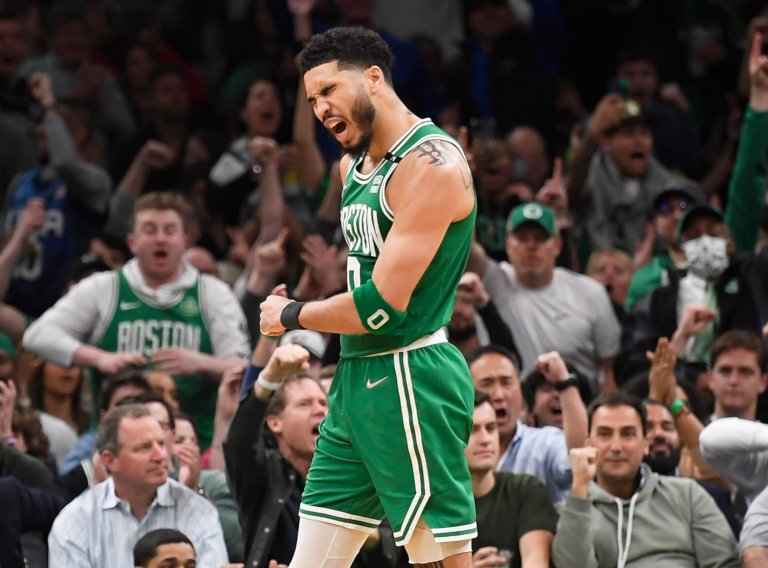 May 3, 2022; Boston, Massachusetts, USA; Boston Celtics forward Jayson Tatum (0) reacts after making a basket in the second half during game two of the second round for the 2022 NBA playoffs against the Milwaukee Bucks at TD Garden. Mandatory Credit: Bob DeChiara-USA TODAY Sports

Two games in, and there are some interesting developments in the second round of the NBA Playoffs.

In the East, the Boston Celtics and Milwaukee Bucks are tied 1-1 in their best-of-7 series, in two games that weren’t even close.

The scene shifts to Fiserv in Milwaukee, where the Bucks have been dynamite lately.

Over in the West, it’s been a back-and-forth slugfest between the Memphis Grizzlies and Golden State Warriors. Memphis gutted out a 106-101 win in Game 2, squaring things up as they move to San Francisco for Games 3 and 4.

Let’s have a look at the updates series prices, and offer our betting factors to consider.

Odds as of May 3 at FanDuel Sportsbook

After starting the series at -200 odds to advance to the Eastern Conference Final, the Celtics have seen their odds shorten to -134.

Boston evened up the series with a crushing 109-86 Game 2 win on Tuesday, but it appears their only adjustment was to make more shots.

4-for-4 from deep for Jaylen Brown (20 PTS).#NBAPlayoffs presented by Google Pixel on TNT pic.twitter.com/7rfXiOuYBt

The Celtics are currently living and dying by the three. They have attempted a whopping 93 triples across two games, against just 71 two-point field goals. On Tuesday, they drilled 20-of-43 from downtown, a sparkling 46.5%, outscoring Milwaukee by 51 from beyond the arc.

Ime Udoka said Jaylen Brown’s hamstring “may tighten up during games.” The Celtics took him out late in the game “because he ran a heavy amount in the second half.” He finished with 38 minutes.

Boston has some injury issues, with Marcus Smart missing Game 2 with a thigh injury, while Jaylen Brown was clearly laboring with a hamstring issue. After scorching for 25 points in the first half, he had just five points the rest of the way.

The Bucks’ odds have improved from +168 to +114, even with Khris Middleton still out for the entire second round.

Getting a split on the road helps, but they’ve found some success that could also be more sustainable than making or missing shots. Despite trailing by 25 at halftime, the Bucks chipped away at the lead by relentlessly pounding the paint.

Giannis goes coast-to-coast for the and-1 basket.#NBAPlayoffs presented by Google Pixel on TNT pic.twitter.com/M7E47Nu4ro

They poured in 54 paint points, outscoring the C’s by 30. After a slow start, Giannis Antetokounmpo, a finalist in the 2022 NBA MVP odds, finished with 28 points, nine boards and seven dimes. This after a Game 1 triple-double.

That doesn’t mean they haven’t had their offensive challenges. The third-highest scoring team in the NBA this season at over 115 per contest, Milwaukee has averaged jut 93.5 across the first two games.

Odds as of May 3 at DraftKings

After missing the game-winning bucket in Game 1, Ja Morant made sure he made every play down the stretch, as he dropped a career-playoff high 47 to lift the Grizzlies to a Game 2 win.

Morant hit just four three-pointers in their opening series win over the Timberwolves, but he’s punished Golden State for their sagging defense, drilling nine over the first two games, including a 5-for-11 effort Tuesday night.

If the 22-year-old Morant can stay hot — he’s averaging 40.5 points, 8.5 rebounds and 9.0 assists to start this series — Memphis seems like a nice value pick at +1000 in the Western Conference odds.

Very rarely does Golden State get outshot in any capacity, but they were bad in Game 2. The Warriors shot just 7-for-38 from downtown, a lowly 18.4% clip. Klay Thompson, Steph Curry and Jordan Poole shot a combined 6-for-29 from distance.

The Dubs may also be down a player, as well, as Gary Payton II, a starter early in this series, left just three minutes into the first quarter after taking a hard foul from Dillon Brooks and injuring his elbow. Brooks was ejected.

Dillon Brooks ejected after this hard foul on GPII 😳 pic.twitter.com/SOPdOJFXow

The young Grizzlies may be ahead of schedule in their playoff progression, but it’s hard to bet against the Warriors and that title DNA, especially now that they return home with home court advantage. That’s why the series prices didn’t hardly move after Game 2.