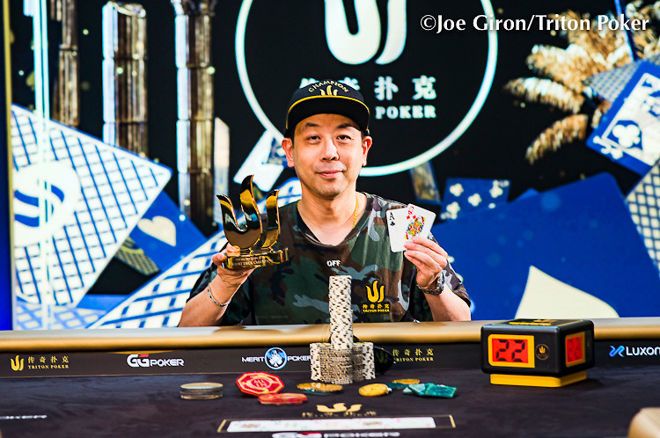 It was the final event of the 2022 Triton Poker Cyprus stop after a 33-month hiatus due to the global pandemic and Winfred Yu topped the field of 41 entries to claim his second Triton Poker crown. Yu outlasted one of his close friends Ivan Leow to take home the top prize of $1,010,000.

Yu began the heads-up match with a chip deficit but favorable runouts in the final two hands of the tournament quickly turned the tide and he found himself on the top spot of the podium. Yu managed to double up with ace-jack vs the pocket jacks of Leow and then in the next hand held ace-queen vs Leow’s pocket queens. An ace on the river was devastating for Leow who was forced to settle for second place and a $699,500 payday.

After 41 entries were recorded on the day, only the top six players would reach the money. It was Wei Hsiang Yeu who was the unfortunate one to be eliminated on the money bubble when he ran ace-jack into Elton Tsang‘s pocket queens. Despite flopping two pair, Yeu was unable to hang on as the board ran out with four clubs and Tsang made a flush.

Ferdinand Putra was left on the short stack and wasted little time before his chips went into the middle but was unfortunately eliminated in sixth place with a min-cash. The final five players battled for over two hours until the next elimination occurred. It took two premium hands to see all of the chips go in the middle with Daniel Dvoress holding ace-king while Yu picked up pocket kings. A nine-high board provided no help to Dvoress who was ousted in fifth place.

Just moments later, Tsang also ran his ace-queen into the pocket kings of Danny Tang. Within a matter of three minutes, the field was dwindled down to just three players. Tang rode the momentum of his recent knockout to take over the chip lead but eventually, his aggression caught up with him. Tang took his chance with queen-ten but once again it was the pocket kings of Leow who quickly called. Tang managed to flop a lot of equity with a pair and straight draw but was unable to improve from there.

Phil Ivey Does It Again! Wins ANOTHER Short Deck Title

That left the final two players, Yu and Leow to battle it out for the title which saw Yu come out on top after a couple of coolers.

The first Triton Poker series in nearly three years was a great success and attracted many of the top poker players in the world. Fans were able to tune into the coverage to catch a glimpse of Phil Ivey returning to the poker scene and capturing another Triton Poker title. Teun Mulder and Andras Nemeth also made their way into the winner’s circle with victories in the No-Limit Hold’em variant.

The next stop for Triton Poker will be a new stop as the circuit heads to Madrid, Spain for the first time ever. That wraps up our coverage of the 2022 Triton Poker Cyprus but stay tuned to PokerNews for many other events coming up in the future.