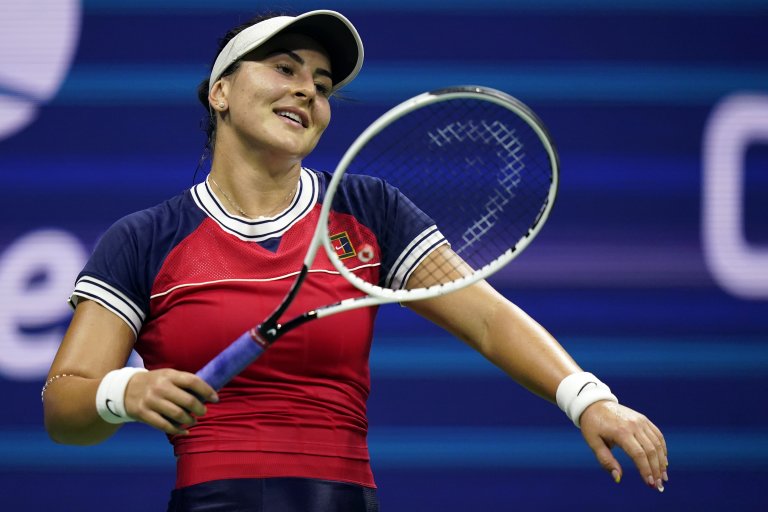 FILE – Bianca Andreescu, of Canada, reacts between points during the first round of the U.S. Open tennis championships, Tuesday, Aug. 31, 2021, in New York. Andreescu, the 2019 U.S. Open champion, is going to take a mental break from tennis and sit out the start of next season, including the Australian Open, saying Monday, Dec. 6, 2021, she wants to “re-set, recover, and grow” after a “challenging” two years that included getting COVID-19.(AP Photo/Frank Franklin II, File)

2019 US Open champion Bianca Andreescu returns in Stuttgart after a six-month break
No. 1 seed Iga Swiatek, on her best surface, looks to prolong her unbeaten streak

The conditions at the Stuttgart Open are unique, as it is the only indoor clay-court tournament at the top level.

The clay is extra-slippery. And it’s fast. And there are lights to deal with. In short, the more times you play it, the better you’ll be.

But not many of the top contenders this year have much Stuttgart experience.

Odds as of April 17 at Barstool Sportsbook

In the first round, Kerber faces No. 5 seed Anett Kontaveit – who did well at this event before last year’s meteoric rise.

Pliskova and Kvitova play … each other.

Some serious contenders will be out after the first round.

After exactly six months away to tend to her mental health, 2019 US Open champion Bianca Andreescu is back this week.

It could have been worse. But Andreescu has exactly zero experience in Stuttgart (and very little top-level experience on clay). And the draw is fierce.

The 21-year-old Canadian could have played a competing tournament in Istanbul, Turkey for her first time back.

That one would have had a lesser field; but she also would have had to deal with the uncertainties that come with playing outdoors in the spring – wind, rain, cold.

Of the eight seeds, four are making their main-draw debut (including the top two seeds and top favorites). Two others have only played it once.

There’s a good chance for plenty of upsets and three-setters this week.

Even if Andreescu and Niemeier had some history, it would be pretty irrelevant as the Canadian returns to action.

She’s been training on clay for about a month. But practice isn’t matches. There are going to be nerves. And a whole lot of rust, too.

All that has made Niemeier a slight favorite, even if both are in the minus.

Still, for Andreescu, it’s a whole lot better than playing Kerber, Kvitova or Pliskova in the first round.

Kasatkina has a funky game, well-suited to the clay. And she has a lot more experience sliding (even when it’s extra slippery). The Russian also has a win over Gauff, although that was more than three years ago in Miami.

Gauff went 13-2 through the clay of Rome, Parma (a small event she won) and the French Open last spring.  A long time ago.

Kasatkina not only is going to try to make her move up and back on the slippery court, she’s going to change the pace and try to break down Gauff’s forehand.

The bottom half is so much denser than the top that whomever does get through to the final – and likely faces Swiatek, might not have the energy to give it a proper go.