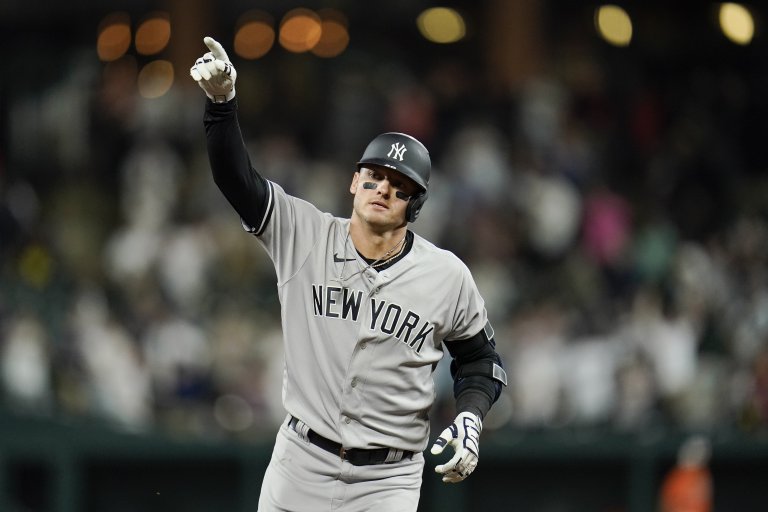 The New York Yankees and Baltimore Orioles face off at Oriole Park at Camden Yards on Sunday, April 17th
Aaron Boone’s club is tied for the second-shortest odds to win the American League East (+240) in 2022
Read below for the Orioles vs Yankees odds and our betting preview

The New York Yankees (5-4) face the Baltimore Orioles (2-6) on Easter Sunday at Oriole Park at Camden Yards. The series finale has a scheduled first pitch of 1:05pm ET. The Yankees will send Nestor Cortes to the hill, while the home team O’s counter with Bruce Zimmermann.

New York is the favorite to win this one and has the same odds as Tampa Bay (+240) in the MLB Division odds, with both trailing favorite Toronto (+160).

Meanwhile, Baltimore — which has finished last in the AL East four of the last five seasons since earning a Wild Card spot in 2016 — has the lowest predicted win total in MLB this season. New York has momentum heading into Sunday’s tilt following a 5-2 comeback win Saturday, keyed by Josh Donaldson’s first home run in a Yankee uniform.

Odds as of April 16th at BetMGM

Sunday’s starters had nearly identical lines in their respective first outings. Cortes scattered three hits, surrendered no walks and struck out five over 4.1 innings against the Blue Jays in an eventual 4-0 shutout of Toronto. Zimmermann had similar success, allowing only three hits and two walks while striking out four over four innings.

Cortes, Zimmerman Set To Square Off

Last season was a breakout year for Cortes, a 36th-round pick in the 2013 MLB Draft. He posted a 2.90 ERA over 22 games (14 starts), tallying 103 strikeouts against 75 hits over 93 innings, with only 25 walks. That efficiency continued this past Tuesday, limiting the potent Blue Jays lineup to just a trio of hits over 72 pitches.

Taking the bump for the O’s is Charm City native Zimmermann. The 27-year-old became the first Maryland native to make an Opening Day start for Baltimore since 1990 and held Milwaukee’s formidable bats in check. The lefty has plenty of expectations as a 5th-round pick from the 2017 draft. He posted a 5.04 ERA over 14 games (13 starts), striking out 56 against 75 hits over 64.1 innings, with 22 walks

If Monday’s start was any indication, Zimmermann is ready to take the next step in his promising career.

The southpaw’s punchout pitch is his changeup. He had it working against the Brewers, inducing nine called and swinging strikes on it. The Yankees will need to be aware.

The Yankees are clearly the superior team in this spot. Gerrit Cole’s annual salary of $36 million is only $8 million less than Baltimore’s entire payroll for 2022. But, for whatever reason, the Orioles have been able to hang with the Goliaths from Gotham over the last ten games.

The only team the Yankees struggle against is the Orioles

The World Series odds show that these teams are miles apart. The Yankees are projected for 92 wins at FiveThirtyEight, while the Orioles are tabbed for a league-worst record of 61-101. With a 1.5 runline in New York’s favor here, it’s worth noting that six of the last last eight games between these two clubs have been decided by one one run.

Baltimore was shutting down New York’s offense for a second straight night until a 49-minute rain delay may have saved the Yanks’ season. Giancarlo Stanton and Co. broke through for four runs in the fifth following the weather, capped by Donaldson’s two-run shot that proved to be the game-winner.

Zimmermann proved he can handle the moment on Monday and while New York should keep it going on Sunday, the trends say this one will be close. Considering the value and recent history of close games between these two clubs, I like the home team here.